No Ramos? No Varane? No problem for Real Madrid. 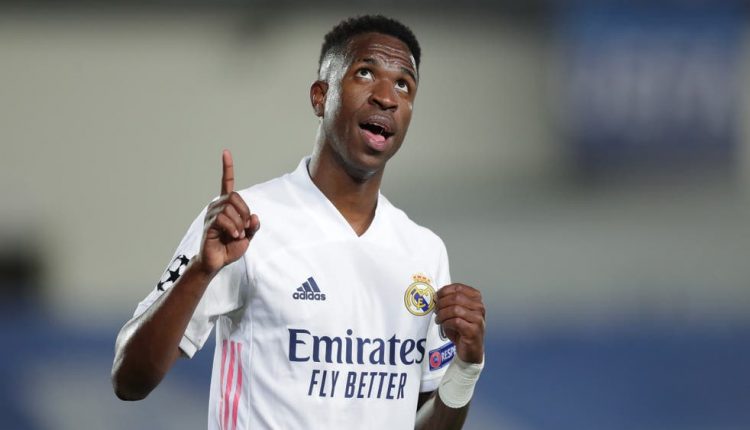 Real Madrid manager Zinedine Zidane commended the Brazilian left-winger Vinicius Jr. for showing a brilliant play as the youngster’s two goals helped his side to a 3-1 win over Liverpool in Tuesday’s Champions League quarter-final first leg.

The 20-year-old has had a history of inconsistent finishes with only 13 goals in 105 appearances throughout his three-year spell with the Galacticos. The moment he provided with the big brace against the Premier League winners taking everyone by surprise, was highly unexpected.

The Blancos’ opened with a goal after an extremely sublime cross supplied by Toni Kroos where the Brazilian received the ball out of the sky with a perfect shoulder-ball control and finished it calmly and comfortably.

The second goal was a blunder by the English right-back Trent Alexander Arnold who mistakenly headed the ball towards his own goal, providing Marco Asensio with an assist on a silver platter. Asensio then dinked the ball over Allison with one touch and finished with his second, making it 2-0 in the first half.

While Madrid had eight shots; six on target, Liverpool did not attempt a shot in the first half and trailed by a deficit of two goals. Around the 50th minute, Mo Salah, assisted by striker Diogo Jota showed good skill work with the ball at his feet inside the penalty area, layed it past Courtois getting one back for his side.

With the injured Sergio Ramos and Dani Carvajal watching from the stands, Madrid’s defense consisted of Lucas Vazquez playing right-wing-back while Nacho and Eder Militao did a great job filling in for Ramos and Varane as centre-backs and Ferland Mendy at the left flank.

At the start of the second half, Liverpool as started to dominate, seeming like they could convert their best spell in the game into an equalizer until Vinicius struck again. This time the youngster stroke a low shot to the right corner assisted by Luka Modric past the defenders, which was absolutely unforeseen by the keeper as well.

Vini Jr. was awarded the Champions League Player of the Match after the game.

In the end, Jurgen Klopp’s Liverpool suffered the same fate as they did in the 2018 Champions League final. With one away goal in hand, will the Reds be able to turn it around in the second leg?