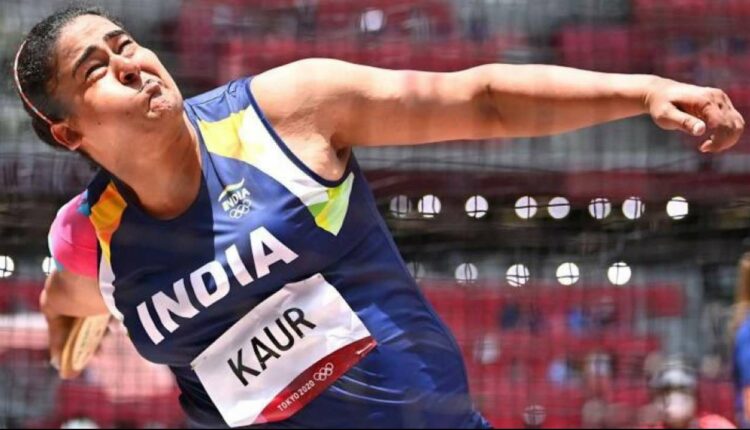 Kaur started with a 60.29m exertion and afterward further developed it to 63.97m before her third toss of 64m. Each contender gets three tosses. The individuals who contact 64m or possibly 12 best entertainers in the two passing rounds advance to the last.

The 25-year-old Kaur, contending in capability B, sent the plate to a distance of 64m in her third and last endeavor to be one of the lone two programmed qualifiers for the last round, the other being American Valarie Allman (66.42m). The last will hung on August 2. The Indian finished in front of protecting gold-medallist Sandra Perkovic (63.75m) of Croatia and ruling best on the planet Yaime Perez (63.18) of Cuba.

The Punjab competitor has been in noteworthy structure this year as she penetrated the 65m imprint twice as of late. She tossed 65.06m during the Federation Cup in March to break the public record and become the primary Indian to penetrate the 65m imprint.

Then, at that point in June, she bettered her own public record with a toss of 66.59m during the Indian Grand Prix-4 to sit at world number six

The Indian ladies’ hockey group crushed lower-positioned South Africa 4-3 in the last Pool A match to record its second continuous success and keep its expectations alive for the quarterfinal in the Tokyo Olympics on Saturday. Vandana Katariya (fourth, seventeenth, 49th minutes) scored a full go-around while youthful Neha Goyal (32nd) was the other objective getter for India. South Africa’s objectives came from the sticks of Tarryn Glasby (fifteenth), captain Erin Hunter (30th), and Marizen Marais (39th). With two successes from their last two pool matches, India have completed the gathering stages with six focuses from five games.

India’s destiny currently relies upon the result of the last Pool A match between Great Britain and Ireland.

The Indians should stand by till the evening to know their destiny. Ireland’s misfortune or a draw will be sufficient for India to seal their spot in the quarterfinals.