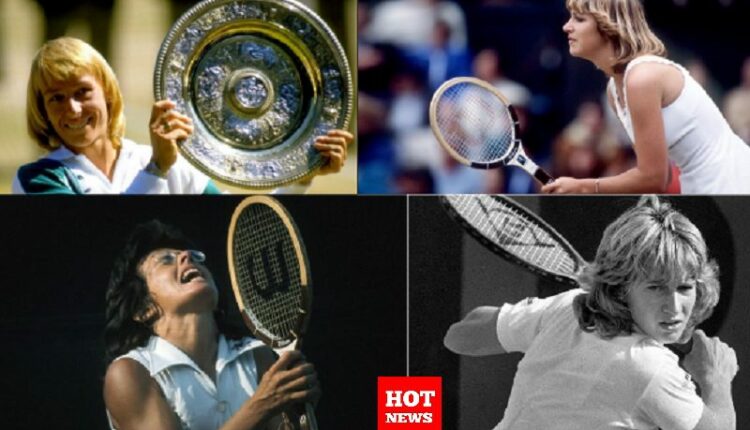 The next in line is Serena Williams who has won 23 grand slam titles, a record which is unbeaten by any player, since the inception of Open Era.

With 22 Grand Slam titles in her pocket, Steffi Graf ranks third in the list and this record of hers is not achieved by any male player (after the beginning of the Open Era).

Last but not the least, 5th on the list, is Billie Jean King who has capture 12 Grand Slam titles.

Unlike men, who stick to playing in one category only, female tennis players compete in all three categories – singles, doubles and mixed doubles.

There is a mention of Open Era, Grand Slams and Pro Slams above, so let us first know what are these three terms. The term Open Era came into being in the year 1968 when major tournaments agreed to allow professional players to compete with amateurs. Before 1968, only amateurs competed in major tennis tournaments. The four major tournaments played after the Open Era are called Grand Slams and therefore the ones that were played before are known as Pro Slams.

Let us now discuss the world’s top Best Female Tennis Players of all the time.

The first female Australian player to win a Grand Slam abroad, Margaret Court, holds the record of winning the highest number of Grand Slam titles (24; 11 in Open Era and 13 before the Open Era) and this is an unbeatable record till date.  Her total win – loss percentage is 90.12% (210 –23) with a winning loss ratio of 61-3 at Australian Open, 47-5 at French Open, 51-9 at Wimbledon and 51-6 at US Open. Court also happens to be the only player to complete a multiple grand slam set twice in all the three disciplines (singles, doubles, mixed doubles). She took a retirement for two years, but came out of retirement and made a strong comeback by becoming the first woman after Open Era to clinch four Grand Slam title. Women’s tennis is basically a baseline dominated game but Court’s unusual serve and volley style of play was her strength. Since the Aussie tennis player did weights (something that women of that era didn’t do), circuit training and running along sandy hill slides, her footwork was excellent and it further helped her style of play. Currently she is a Christan Minister in Perth.

Although Williams is currently ranked 11th in WTA (Women’s Tennis Association) ranking, she has enjoyed the World Number 1 rank for a total of 319 weeks and stands third after Steffi Graf and Martina Navratilova. Serena’s record of 23 Singles Grand Slam titles is yet to be conquered by any player (male or female) in the Open Era. Serena Williams, along with Venus Williams, popularly known as The Williams Sisters, have an unbeatable record of clinching 14 doubles Grand Slam titles. The record for winning the highest number of matches (335) in the women’s singles category at the Majors is held by Serena. In the year 2016, the former World No 1, became the highest paid female athlete and is said to have earned $ 29 Million USD through prize money and endorsements. During the year 2009-2010, the Williams sisters won 4 consecutive doubles Grand Slams titles. Serena’s strong built enhances her game and she has the most powerful shots and serve in the women’s category but sometimes her aggressive game puts her at risk during her tough matches.

Graf and Boris Becker are credited to have popularized Tennis among the people of their country, Germany. In the year 1988, Steffi won a Golden Slam (winning all four Grand Slams and Olympic Gold Medal in the same calendar year). Steffi has clinched 22 Grand Slam titles and is the only player to have won each Grand Slam at least four times. Post WTA and ATP started ranking players, Graf’s record of being the World No 1 for a total of 377 weeks remains unbeaten. The third on the list, after Navratilova and Evert, Graf has won 104 singles titles and she and Magaret Court are the only two players to have won at least 3 Grand Slam titles in a calendar year for five times (1988,1989, 1993,1995, 1996). Named as The Greatest Player of the 20th Century by a panel of experts at Associated Press, Steffi has clinched 6 French Open, 7 Wimbledon, 4 Australian Open and 5 US Open titles. Popular for backhand slice shot, Graf mostly played inside out forehands and had an excellent footwork. An aggressive playing style coupled with perfect timing of the impact of her racquet with the ball added pace to the ball and made her shots powerful.

The fourth on the list, Navratilova has a number of records against her name. Since women in tennis have participated in all the three categories (singles, doubles and mixed doubles) so there has to be a record holder for the same and Navratilova happens to be the only player in the history of tennis to hold the Number 1 spot in both doubles and singles. Martina is one of the three women players, Doris Heart and Magaret Court being the other two, to have achieved a career grand slam in singles, doubles and mixed doubles along with clinching the highest number of singles (167) and doubles (177) tittles. Holding the World Number 1 spot in both singles and doubles for a total of 332 and 237 weeks respectively, Navratilova’s 74 matches winning streak is the longest one after the Open Era. Having clinched 18 Grand Slam titles, 31 Women’s Doubles titles (record), 10 Major Mixed Doubles titles, she owns the record for the highest number of Grand Slams victories by any tennis player. An ace tennis player, she was in top 10 of Women’s Tennis Ranking for 20 consecutive years (1975-1994), among top 5 for 19 consecutive years, among top 3 for 15 consecutive years and for 7 long years she was World Number 1 in WTA ranking. Navratilova’s serve and volley style of play helped her in dominating most of her matches.

Considered to be arch rivals on court and best of friends off court, Navratilova and Evert have clinched 18 Grand Slam titles each and hence acquire the fourth position in the list of women Slam winners jointly. Evert’s record of never losing in the first or second round of any Grand Slam tournament (she lost only twice in the third round) that she’s played along with being a part of 34 Grand Slam finals is unachievable till date. Evert happens to be one of the of the four awardees of the sportsman of the year award in tennis. Her overall win – loss ratio of 1309-146 and 382-22(winning ratio of singles played on clay court) is another record which is yet to be surpassed by any tennis player. Chris Evert has clinched 297 tiles on clay court which clearly proves her dominance on this surface. She also made her nation proud by winning 8 Fed Cup titles.

Last, but not the least is King, the founder of major women’s and tennis organizations like Women’s Tennis Association and Women’s Sports foundation. For clinching 39 Grand Slam titles comprising of 12 singles, 16 doubles and 11 mixed doubles, Billie was awarded the Sportsman of the year award in 1972. A feminist to the core, King defeated Bobby Riggs (top men’s player in the 1930s and 1940s in both the amateur and professional ranks) in an exhibition match which was dubbed as “the Battle of the Sexes”, and won $100,000 for her victory. Riggs had won the Wimbledon men’s singles title in 1939 and was considered World No. 1 male tennis player in 1941, 1946, and 1947. Because of her good footwork, she was an excellent volleyer and had an aggressive style of play. Out of the 11 times that she participated in the Wightman Cup USA, she won 10 times and she also pocketed 7 Fed Cup titles.

We can say that women are the right and true owners of the throne of tennis and the benchmark of records that they have set is very difficult to be achieved by any male tennis player.