UEFA guidelines state a minimum ten match penalty for any racial behavior portrayed on the field. Although, alternate parties raise questions on this decision. 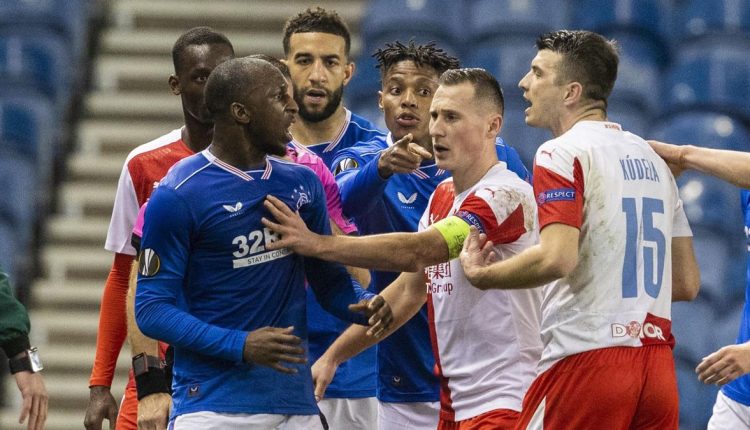 UEFA has banned Slavia Praha’s Ondrej Kudela for ten games after being found guilty of racially abusing Rangers’ Glen Kamara last month at the Europa League 8th finals-leg match at Ibrox. The defender was penalised for discrimination. Along with him, Kamara has also been banned for three games for his following response.

According to The Guardian, A case of “racially aggravated conduct” against Kudela has been submitted to the Procurator Fiscal after the 34-year-old was accused of shouting a discriminatory slur into Kamara’s ear. Kamara has been reported to prosecutors over an allegation that he assaulted Kudela in the tunnel after the match.

The two clashed around the closing minutes of the match. Kudela was seen approaching the Rangers player, cupped his hands to Kamara’s ears, and said something. Kamara reacted in an instant, saying he was racially abused by Kudela before players from both sides became engaged in the encounter.

Kamara says Kudela called him a “f*cking monkey” towards the end of the game at Ibrox, which Slavia won 2-0 to progress to the last eight of the Europa League.
“He came over and said ‘you’re a monkey, you’re a f*cking monkey and you know you are’. From there I reacted and said ‘he’s racist, he’s racist’.
“From there I had a lot of emotions going through my mind; angry, upset, I felt humiliated. All my family, friends, fans, whoever is watching, I felt like a little boy. Kamara told ITV.

Multiple scenarios and conclusions have been formed following this event. Recently, a Czech politician, Vratislav Mynar, expressed his two cents on the scene, saying Kudela was never actually proven guilty.

He said in a letter to the UEFA disciplinary committee; “Despite that you decided to punish a player who didn’t harm anyone and only verbally — in his words — offended his opponent,”
“You sentence a decent person without a single piece of evidence.”

Therefore, he also might have a valid point that since the racism charges against the offender were not proven, Kudela could be put in a questionable position whether he actually uttered any racist statements.

Coronavirus in India: All 3693 monuments in the country including Delhi’s Red Fort and Qutub Minar closed till May 15