The Reds make their way into the semis and onward to face their next opponent AS Roma after a 2-0 triumph over Granada CF. Cavani scores his 350th. 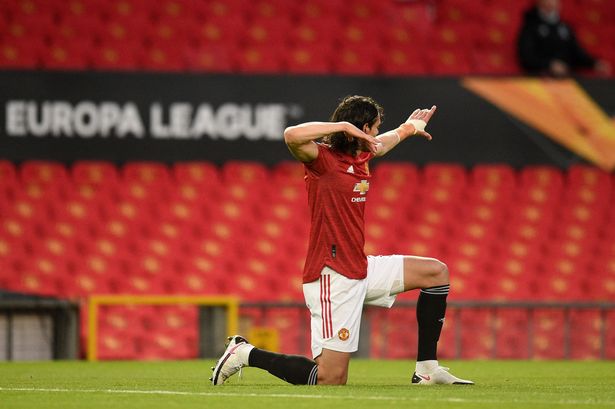 United opened the scoring as early as the 6th minute with Edinson Cavani volleying Pogba’s header into the net, making it 3-0 on the aggregate. It was the Uruguayan’s 9th goal this season in all competitions and his 350th in total. Granada defender Jesus Vallejo, who is on loan from Real Madrid, headed the ball into his own net during the match’s closing minutes. A cross from Alex Telles, which was meant to be for the recipient Juan Mata, missed out on the ball. Nevertheless, it wasn’t a total loss for the player.

Ole’s side has shown a good quality skill throughout the tournament as well as the Premier League. United even managed to keep their fifth consecutive clean sheet in this tournament.

“The next step is to get to a final, win a trophy, get over the line. That is the aim,”
“I can see the hunger and motivation in the players. I’ve not seen too much of them. They defend well, as Italian teams always do. We all know Edin Dzeko so every ball into the box is a dangerous one. Ole Solskjaer on AS Roma.

“We are looking forward to it. We’re in the semis – it feels like a proper European tie because Roma is a club with lots of history. We’re going into it hoping to get to the final. If we can finish the season with a trophy that would be great.”

United top-scorer Bruno Fernandes has been caught up in a dry spell lately in this half of the season. He has only had two goals in the last eight matches, which would seem like an eternity by his time. He showed desperate efforts to score but all of them ended up either over the bar or towards the corner flag.

The Reds won their last Europa trophy in 2017 against Ajax and managed to reach the semi-finals last year but lost to Sevilla. Coming 2nd in the Premier League, United’s odds to win the competition under Solskjaer are looking good so far.

After Wining India’s first Olympic singles match in 25 years, Nagal Knocked out by…