United defeated Granada CF 2-0 at the Europa League night, having an upper hand in their next fixture against the Spanish club. 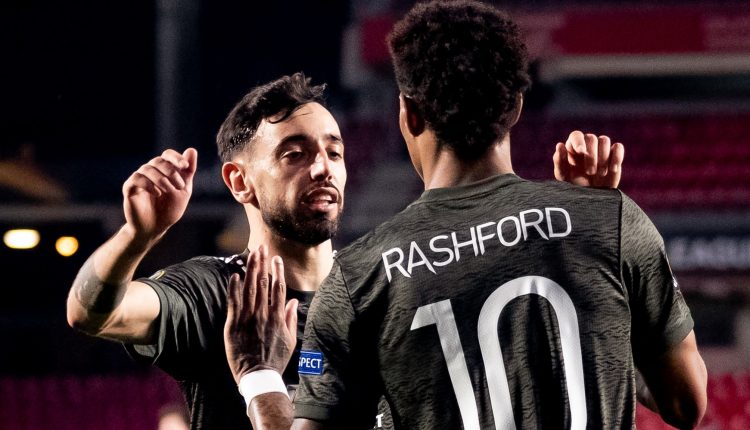 United competed in the UEFA Champions League 2021 in the group stages. They conceded three losses in their fixtures, leaving them in third place, three points behind group leader Paris Saint-Germain and second-place RB Leipzig in Group H.

They have subsequently come through two UEFA Europa League ties, eliminating Spanish side Real Sociedad with ease before edging past AC Milan in the round of 16.

In the 30th minute of the match, Victor Lindelof provided a clearance ball from their side of the half. It perfectly lined in with the right foot of United winger Marcus Rashford, who controlled well before coolly finishing to put United ahead and notch up his 20th goal of the season in all competitions.

Granada countered with a mishit cross from Yangel Herrera, on loan from Manchester City, hitting the crossbar before Kenedy challenged De Gea with a fine volley.

Bruno Fernandes scored a late penalty after he was caught off the ball by Yan Eteki into a foul challenge in Granada’s penalty area. Fernandes, known always to score his penalties, shot it into the left corner, gunning past Rui Silva after his unsuccessful attempt to save the shot.

The match was interrupted in the early first half when a streaker invaded the pitch, running across the field naked. The issue was immediately taken care of by the security present at the stadium.

“They [Rashford and Fernandes] have been exceptional, so important for us,” added Solskjaer.

“It was a very good run by Rashford; takes the ball fantastically. Bruno is so confident on penalties even though the keeper almost saved it.”

“We want to win every game. It’s still a young team, a learning team. We have to improve all the time. Football catches you so quickly if you rest. We can’t have any other approach.”

Although it was an important victory for United with two away goals secured, Ole was not happy towards the end of the match as three of his key players Luke Shaw, Harry Maguire, and Scott McTominay were yellow-carded and suspended, meaning the trio will miss out on their second-leg fixture against the Spanish club.