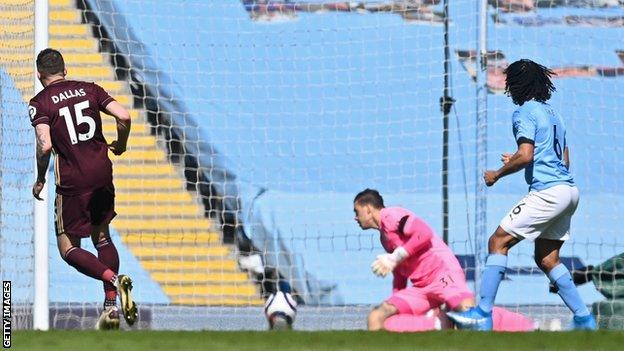 Dallas’s first goal, assisted by Leeds top-scorer this season; Patrick Bamford shaped up for a shot but instead chose to pass the ball. Dallas struck the left post, which ricocheted into the bottom right of the net.

During the closing minutes of the first half, Liam Cooper smashed into Jesus with a sliding tackle. He became the first Leeds man in referee Marriner’s book. After a VAR decision, the player was immediately sent off. City had been pressing for a winner and finally were able to take advantage of Cooper’s red card through the Ferran Torres equalizer in the 75th minute.

Dallas, in the added time, sprinted onto a precise through ball from teammate Alioski. The Leeds midfielder, dashing past Fernandinho and Stones, slid a right-foot shot going through Ederson legs for his second goal of the game.

City, having 71% possession of the ball throughout the game, dominated the stage wholeheartedly. Along with that, they had 29 shots, whereas Leeds was a 100% on accuracy with two shots in total and both on target.

“We were not aggressive enough. We arrived in the final positions but today we could not score a goal. The second half we were there. We didn’t create enough chances, but when we play teams that set up in that way with the pace they have on the counter-attack, we need to be careful. They have a team that in transition are fantastic, and I congratulate Leeds. We had shots, but not much clear chances. John Stones was fantastic, and Fernandinho as well. We arrived in the final third, but after that we didn’t create much.”
“We are going to rest and prepare two days for the game in Dortmund and decide on how we are going to play.”

City’s recent unbeaten run of 21 games was recently broken in their previous fixture against Manchester United. Still, their exquisite form this season did not take them long to regain that streak. This time they were able to dial it up to 28 games in all competitions, out of which they won 27.