Just moments after Marco Reus had snatched an equalizer with an away goal for the German side, Phil Foden saved Manchester City in the 90th minute, giving them a hard-earned 2-1 victory in the first leg at the Etihad Stadium on Tuesday. 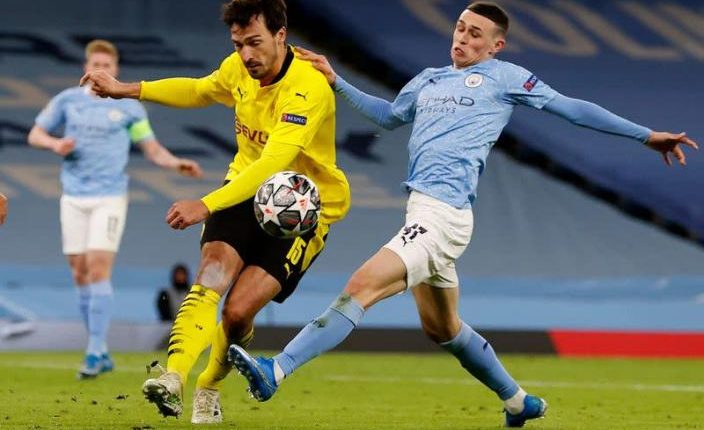 Manchester City went ahead in the first half through Kevin De Bruyne before Marco Reus scored an 84th-minute equalizer. The 20-year-old Phil Foden grabbed a last-minute winner assisted by the former Dortmund player Ilkay Gundogan to tip the balance in favor of the Premier League leaders.

Although, a controversial moment happened in the 36th minute where the striker Jude Bellingham in a one-on-one encounter with the City goalkeeper Ederson, robs him off the ball and was on his way to score when the referee blows his whistle before the ball could see the back of the net, disallowing the goal.

“It’s a bit frustrating at a time when they’ve got so many cameras and so many TVs watching the game that they don’t wait for me to put it in the net and then check it.”
“All I got told was that I got booked and it’s going to be a free-kick for them. I think they should have checked it but apparently I had my studs up, caught the goalie and it was a foul.”

This issue has enraged BVB fans all over social media. Even the injured Dortmund winger Jadon Sancho Tweeted: “This Ref needs checking!”

Things could have worked out very differently had Dortmund gotten an equalizer in the mid-first half.

Dortmund will host the return leg next Wednesday. Currently placed 5th on the Bundesliga table, they have seen their title hopes perish and are looking less likely to grab a place in the top four, while City is looking to complete a quadruple.

Manchester City has now won 27 of their past 28 games in all competitions and is onward to the road of winning the Quadruple; Champions League, Premier League, FA Cup, and League Cup. It is very likely for Pep Guardiola’s side to win all these four competitions.

The likes of Ruben Dias, Ilkay Gundogan, and Phil Foden have shown an excellent display of form and have been a massive influence on the team.

There have been talks that Manchester City is trying to poach and sign the Dortmund striker Erling Haaland as a replacement for Sergio Aguero, whose contract expires after this season. City expressing their quality and showing what they have to offer if they manage to knock Dortmund out of the tournament might actually be able to entice Haaland to come down to England.

SEBI imposes fine of Rs 25 crore on Ambani brothers and others, regulator has given this order in this two-decade old case