The PSG defender suffered a groin injury in the first-leg of the Champions League last week and will be absent for the second-leg of the same against Bayern. 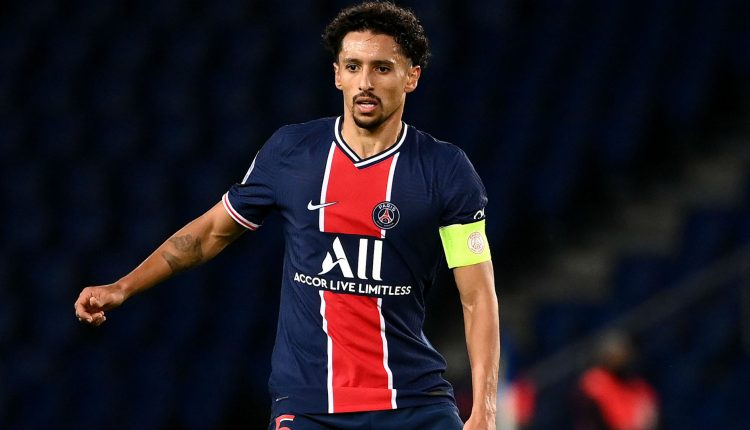 After a very close and nail-biter match featuring Paris Saint Germain against the current European champions Bayern Munich, The French giants were able to overpower the home side with a 3-2 win.

PSG played fine back at the defence, enough to omit or block out 29 shots out of the 31 fired upon by the champions. But, with Marquinhos, who after a brilliant cross from Neymar, scored to double their lead, out of the picture, leaves a hole in their line of defence.

After immediately scoring the second, Marquinhos was seen struggling to play and requested for a substitution. The Brazilian remained doubtful with a right adductor muscle injury and could not even train with his teammates on Monday.

“We all know Marquinhos’ qualities; he is our defense leader,” Marquinhos’s fellow defender Presnel Kimpembe told a press conference on Monday.
“He is our captain. If he is not there, it will be a big hole, although there are many great players in this squad to cover for his absence,” he added.

Marquinhos will also be unavailable for the next Ligue 1 game against Saint-Etienne. April 21’s French Cup last eight ties with Angers after missing last Saturday’s league win Strasbourg.
“His return to training will take place in 12 days, depending on his recovery,” PSG said.

To nullify the situation, Bayern would also be playing without their main man-up-front, Robert Lewandowski. Eric Maxim Chupo-Moting filled in for him, and after quite a lot of attempts, he managed to pull one back for Bayern. Joining Lewandowski, a new addition to the injury list is Serge Gnabry, who has been tested positive for COVID-19.

According to AFP, The striker Mauro Icardi and defenders Layvin Kurzawa and Juan Bernat are also unavailable for coach Mauricio Pochettino with fitness issues.

The match between these teams will decide whether PSG, with a goal in hand, get their revenge for last year’s Champions League final or will Bayern prevail over them again.

Maharashtra New Guidelines: Curfew in Maharashtra for 8 days from tomorrow night to next 15 days