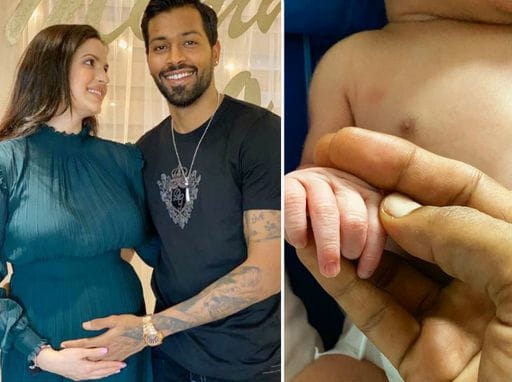 Indian cricketer Hardik Pandya has become a father. Her fiance and Serbia actress Natasha Stankovich has given birth to a son. Hardik has given this information by sharing a photo on Twitter. However, the baby’s face is not visible in the photo. Hardik wrote- We have got blessings as a son. Sharing the photo, Hardik wrote, “We are blessed with our baby boy.” Just yesterday, Hardik had shared a selfie with his wife and used a GIF that read, “Coming Soon.”

Within minutes of Hardik sharing the happy news, the comments section on his post was flooded with congratulatory messages for the couple and the new arrival in their life. One of the first few to wish Hardik and Natasa hearty congratulations were Virat Kohli, KL Rahul, Athiya Shetty, Yuzvendra Chahal, Sania Mirza, Sachin Tendulkar’s daughter Sara Tendulkar, Shreyas Iyer, Zaheer Khan’s wife, and actress Sagarika Ghatge among many others.

Hardik got engaged to Natasha on 1 January this year. He also gave information about this through social media. After this, on 31 May 2020, Natasha and Hardik had informed from social media that they are going to become parents.

Natasha and Hardik had been dating each other since August

The news of Hardik and Natasha’s affair was running on social media since August last year. Both of them also appeared together many times. Hardik had also asked for votes for Natasha, who was shown in dance reality show Nach Baliye-9.

Father did not even know about the engagement

Hardik had said in an interview, “Parents did not even know about my engagement. Brother Krunal was also informed two days ago. Despite everything, the family supported me. He told me to do whatever you want to do. ”The information about the engagement was shared by Hardik on Instagram. He wrote, “Main Tera Tu Meri Jaane Sara Hindustan”. In the photo, Hardik was seen with an engagement ring with Natasha.

July 31 was the biggest day of 2020 on OTT platform; Vidya’s 3 films including Shakuntala Devi are being released