In the history of the world, three things are quite convinced- Taxes, Death and Germany’s performance in Russia. Yes. It is true, as right from the beginning of the tournament, Germany has failed to prove themselves as the defending world champions. With a star-studded team like The Mannschaft, crashing out from the first round is quite a shocker in the football world. The team played in the Group F with Sweden, Mexico and South Korea.

At the beginning of the tournament, Germany faced Mexico, and with a half-hearted defense line, the game ended with a scoreline of 1-0 against The Mannschaft. 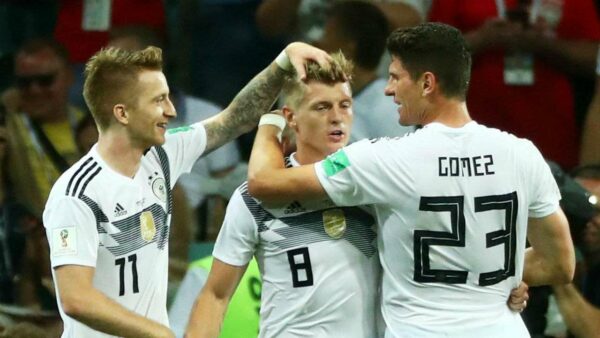 The team continued their campaign and faced Sweden their second group stage match with and eventually they were victorious with a score that stood 2-1. However, one must say Germany was literally saved after a match-winning free-kick from Tony Kroos in the extra time (90+5). If that would not have converted they would have claimed a draw against Sweden. With the win in their second group game, everyone thought that with this team playing against an underdog like South Korea, they are surely qualifying for the next round. But this is football and every single possibility can happen and that what exactly happened today. With a defying score 2-0, Die Mannschaft crashed out of the FIFA World Cup 2018.

This is for the first time in 80 years; Germany is out of the tournament in the group stage. This was quite a record as they played in the second round of the last 16 world cups. Unluckily for the Germans, they streak has ended and of course not in a good manner.

Germany vs. South Korea- As it happened:

We all have seen some of the most unexpected things happening in this World Cup, but the result which we saw in this match was clearly not justifying. The team which entered the World Cup as the defending Champions cannot lose to a side which lost both their group matches. Not only that, the side which has not been qualified to play the qualifiers for World Cup 2022 in Qatar. Seriously; this was a real shocker. From the beginning of the match, Germany had to score a goal or a Draw could have helped them to qualify for the next round.

In the first half of the match, German players were seen playing a school-team football. Another thing which was noticed is Germany’s defense line. Despite losing to Mexico and claiming a very close victory against Sweden, they were doing the same thing as the defense line was pressing really hard up to the center line. Korea did create some counter attacks but the German speed came to the rescue. The ground was quiet until in the 90th minute a ball was netted by Korean striker Kim Young.

However, it was declared offside. But the drama started when it was signaled for a review and the VAR team noticed the ball actually came off Tony Kroos and it was declared a goal. After few minutes, German goalkeeper Manuel Neuer was found in the middle of the pitch and Ju Se-Jong rolled the ball in the empty net of Germany’s post.

With a real unexpected performance from the Germans, the World cup campaign for Jogi Low’s side came to an end in a very unusual manner.