In the last encounter of all group stage matches, the two best sides of the tournament faced each other and eventually, the world came to experience some great football. As both England and Belgium had already qualified before the match started, the star players were given some rest to avoid injuries. This gave chance to some of the new players on the team, and they all showed some good football on the pitch. 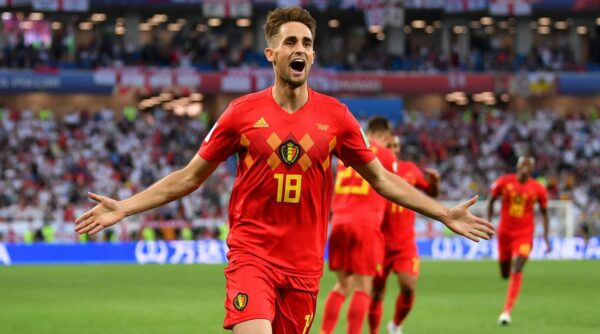 The starting XI of Belgium had 9 changes from the squad of their previous match, whereas England had 7 changes. This is for the first time in this World Cup; fans came to see 16 changes in a single match. Right from the beginning of the match, The Red Devils were pressing and creating more chances than that of England as the young England team was unable to mark the Belgium players.

In the 5th minute of the match, England did create a chance but it was well saved from Courtois. Southgate’s side desperately missed the leading scorer of the tournament, Kane and of course their Captain too. After that, no such chances were created from the English side which could have troubled Belgium. On the other side, with unsung stars like Adnan Janujaz, Fellani and the Chelsea star Batshyuai, England faced quite a lot of on-target shots in the first half itself.

After five minutes of the first 45 mins, the former Manchester United youngster, Adnan Janujaz showed a little skill with is the right foot and finished with a curling left-footer past the English goalkeeper Pickford. Ten minutes to the first goal of the match, England striker Rashford got a clear to equalize but ran past the line and eventually was called offside by the assistant referee.

Belgium side then made two changes; as the goal scorer Janujaz was called off and Mertens was given a chance as a right winger for the team. Mertens played well for the rest of the match and he did create some chances that might have increased the lead for The Red Devils. And for the second change for, Kompany as a Centre back for the team.

English players were literally clueless in the second half as they were facing some real challenges for the Belgium side. However the lack of experience in ‘Les Diables Rouges’ restricted the scoreline in 1-0 as with the football they have played, it could have 3-0 easily or so.

As the game ended in 1-0 to Belgium, the English side finished second in their group and will face Colombia in the pre-quarters and as an award for finish first in the group, The Red Devils will face a comparatively loose opponent Japan.