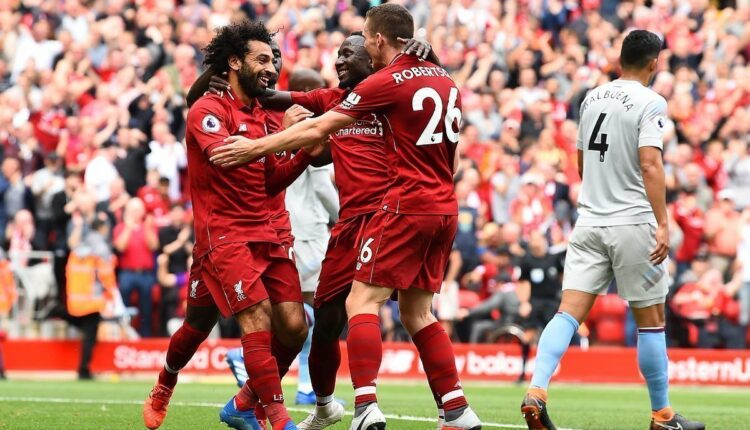 Liverpool have climbed to the zenith of the English Premier League table after grinding out a 1-0 victory over Brighton and Hove Albion. The Reds snatched the full three points at the Anfield stadium as they made a hat-trick of triumphs. Mohamed Salah, the beloved Egyptian King of Liverpool scored a brilliant goal at the 23rd minute, displaying sublime first touch and finish from a Roberto Firmino assist. With this goal, Salah has now scored 29 goals in the last 29 games at Anfield and has taken his tally of direct involvement in goal to 44 (33 goals and 11 assists) since last season.

Liverpool Starting 11 was: Alisson, Trent Alexander-Arnold, Joe Gomez, Virgil Van Dijk, Robertson. Milner, Keita, Wijnaldum, Salah, Mane, Firmino. Later in the second half, Jordon Henderson, Daniel Sturridge, and Joel Matip were brought to the middle and they were decent too, along with the starting 11.

The reaction from Liverpool manager Jurgen Klopp, after Salah scored the opener

Liverpool goalkeeper Alisson was once again outstanding between the woods, with a match-winning save at the late 80+ minutes of the game, being the highlight

The game saw Liverpool grinding out a scrappy win but nobody can win by big margin each and every game. So, churning out three points in not-so-good games is a mandate if League triumph is to be achieved. The game was a tale of two halves. In the first half, after setting the paddle in, Liverpool displayed scintillating football adorned with waves after waves of attack. The Reds should have been three up by the half-time. The second half was probably the worst half by Klopp’s Liverpool as the Reds looked disorganized and were not going for penetrative attacking. The defensive resilience and the excellence of Alisson were instrumental in Liverpool getting the three points as the Kopites survived second-half resurgence of Brighton.

The brilliance of Alisson resulted in Liverpool is the only team yet to concede a Premier League goal. The way Milner won the ball in the buildup of Salah’s goal, was a major highlight of the game. The mojo of Salah, Mane, Firmino and their silky link-up play were eye-catching but midfielder Wijnaldum (completed 75 of his 76 passes) and left-back Robertson (was delivering lethal deliveries to our front three),  were absolutely world-class, equally instrumental in the victory.