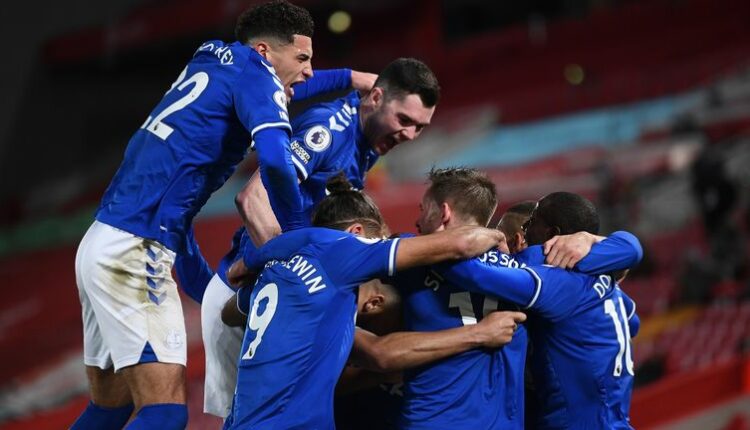 Everton ended a 22-year streak to win a Merseyside derby at Anfield and earned themselves a 2-0 victory. This was a fourth consecutive Premier League defeat for Liverpool following the matches with Brighton, Manchester City and, Leicester City.

Liverpool despite having 71% possession of the ball throughout the game and 15 shots were beaten under Jurgen Klopp’s spell burdened by numerous injuries including Joe Matip, Diogo Jota, Fabinho, James Milner, Joe Gomez and, Virgil Van Dijk who suffered a serious ACL injury in Liverpool’s previous game with Everton itself. Jordan Henderson is now the latest addition to the list of injured players as in the first 30 minutes he suffered a groin injury and was seen holding his hamstring, struggling to get up.

Richarlison’s early strike put Everton in front after just 3 minutes into the match when he latched on to a great through pass from James Rodriguez swiftly past Allison. Every time Everton played the ball long, the central defenders were not able to deal with that leaving lots of empty space for Everton to attack.

Liverpool started off with the second half at a dominant pace with in-goal attempts from Mohammed Salah, Sadio Mane, and Xherdan Shaqiri. Jordan Pickford made a total of 6 on-target saves and did a great job for the toffees.

Around the 84th minute, with an error by Trent Alexander Arnold tripping Dominic Calvert-Lewin within the box, Everton was awarded a late penalty which when taken by Gylfi Sigurdsson saw the back of the net making it 2-0.

The victory against Liverpool has brought Everton to tie with their Merseyside rivals with 40 points and a game in hand, increasing their chances to enter the top 4 of the Premier League table. Meanwhile, things have not looked worse for Liverpool this season, with injuries piling up as they play more games.

Netflix’s Ginny and Georgia to Premiere this Month