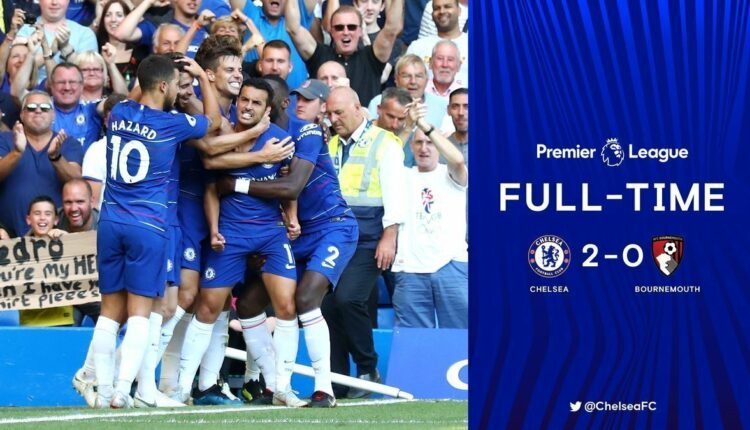 Chelsea earned a hard-fought victory over Bournemouth at the Stamford Bridge to win their first four Premier League opening matches for the sixth time. The last time this same feat was achieved, the Blues went on to win the League under Jose Mourinho back in 2014/15.

Marcos Alonso was a revelation for the Blues, as the left wing-back was the most lethal attacking outlet, especially in the first hour of the game. Alonso almost scored in the first half. Bournemouth were left to rue the missed chances by ex-Chelsea man Nathan Ake and Callum Wilson. The visiting side had their chances as well but Wilson and Ake squandered the easiest of them.

When it looked like the tie is eventually going to be ended with the sides sharing the points, substitute Pedro scored a beautiful goal at the 72nd minute. The slick one-two play with Giroud, the meticulous feint, and the sublime finish make the Pedro goal special. Hazard doubled the Chelsea lead at the 85th minute.

Chelsea boss Sarri told Sky Sports: “This kind of match usually you can win in the last 20-25 minutes. The match was very difficult against a very organized team. They defended very aggressively and the situation was not so easy.”

Bournemouth manager Eddie Howe said: “We had good opportunities. We knew today was probably going to be a counter-attack day and set plays, and it turned out that way. It was a good chance for Callum and Nathan’s one is a big moment in the game because you are trying to take the lead and make it difficult for Chelsea.”