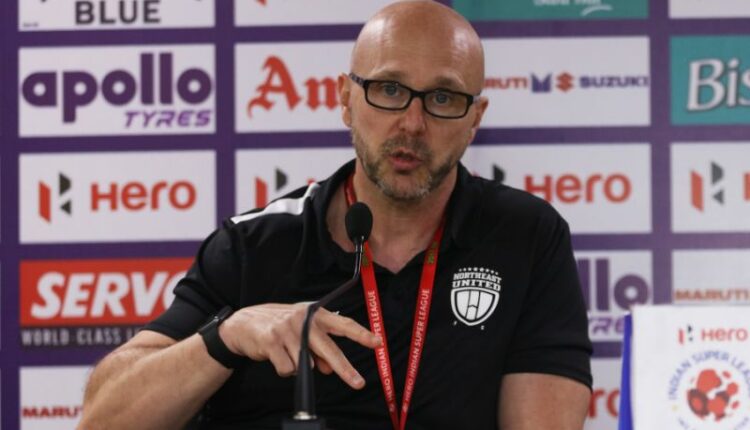 Losing for the fifth straight time in the Indian Super League, Northeast United had a bit of a bitter ending added to their Away loss to Mumbai City. from a game many had predicted to end in a draw by the 90th minute, the last few second’s action changed the whole game in an instance.

Eelco Schattorie, the Highlander’s coach was not impressed by the referees’ inaction on the field when John Mosquera, the Northeast United Forward man from Colombia was down with injury. But he his dismay went two fold when even the opposition side (Mumbai City FC) overlooked the incident. His dissapointment was understood when Lucian Goian took the opportunity and scored the winning goal in extra time, ending the score board with a 3-2 win.

When asked about the tension in the field, all Schattorie had to say was that it was not sporting from their side (Mumbai FC) and out of emotions blurted “Yeah yeah, they didn’t see the ball my A** “. He however later apologized about going to the Mumbai CIty team’s box and complaining but he stood affirm with his claim on the non sportsmanship act of the Mumbai team side

With another loss added to the sheet the former East Bengal coach was still optimistic about their next and final match for the season against Athletico Kolkata. Schattore explained how they opened up too much in the second half and gave away the ball one too many a time to the opposition

However the Dutchman was not sore with the loss and even congratulated the Mumbai team on their win in the Post match press conference.

Northeast United are facing rather a tough spot in the league as they are left with just one game to go whilst remaining at the bottom of the table managing to secure only 11 points so far. Northeast UTD FC despite their massive fan support haven’t really been able to shine on the main podium. Ever since it’s inception the club has never reached the top four spot of the table and with the season’s first ever league run, their luck seems to take another downfall.

Vivo v7+, the new phone with high specifications that will blow up your mind