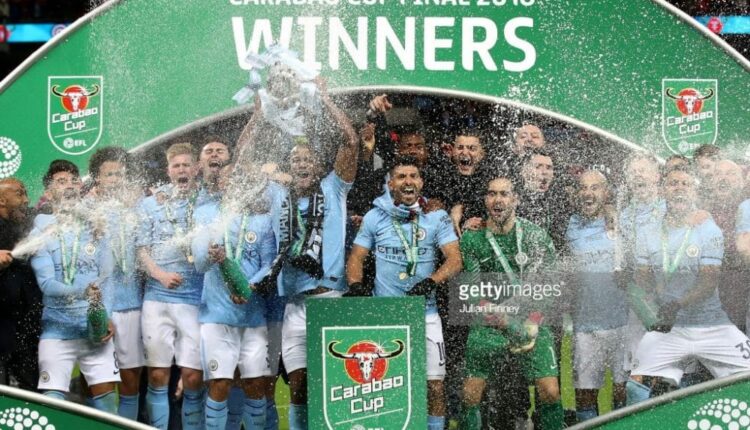 Wembley stadium witnessed yet another thrill of the winning moment yesterday after Manchester City lifted the Carabao Cup or the League cup for the fifth time. Pep Guardiola’s men crushed a strong Arsenal side with a 3-0 lopsided victory.

With a cup drought haunting the Glorious arsenal legacy, Arsene Wenger was in no mood to take home anything lesser than a victory that evening, but the Sky Blues were not showing any pace of slowing down, With the English Premier League in firm grip, and a stronghold in the Champions League, they didn’t really share the same pressure as of that of the former manager.

The gunners straight away fired on all cylinders as soon as the referee blew his whistle, but Manchester City never really let Arsene’s boys go anywhere beyond the midfield area. What seemed almost like an even match up, it was in the 18th minute that Sergio Aguero speculated a lob pass and gave a slight nudge from the back to Arsenal Defender Shkodran Mustafi. Mustafi, however, relied on an appeal which was overlooked by the ref and in that few second’s time Aguero was well past him as he went on to open up the score sheet. One nil to Man City.

The rest of the first half was somewhat mundane. Arsenal tried but City’s defense was tight. They could only rely on counter attacks by making use of their fresh signing Aubameyang to make use of his pace, which he did but Kompany was always one step ahead of him.

In the second half, despite being one goal down it was Pep’s men who were being the aggressors. David Ospina time and again proved his worth as being the last wall of defense but then again in the 58th minute with Debruyne’s corner kick and Kompany’s lucky last touch, Macn City doubled their score.

In the later stages it was still Manchester City doing most of the attack it seemed a 2-0 score didn’t quiet quenched their thirst. Ramsey was substituted by Welbeck, a clear sign that Arsene Wenger was trying to strengthen his lackluster attacking side whilst giving up on the already broken defense structure. Then on the 65th minute David Silva placed the icing on the cake with a thundering finish from Sane’s assist.

By the time the 90-minute mark was up most of Arsenal’s supporters were already halfway home, Pep proved his worth once again with a fifth League Cup for the club and the almost inevitable Premiere League title up ahead. Arsene Wenger, on the other hand, has just one last straw left for the season, The Europa League’, many have already speculated he oust from the club