Eden Hazard might not be able to play football again if he undergoes third ankle surgery. 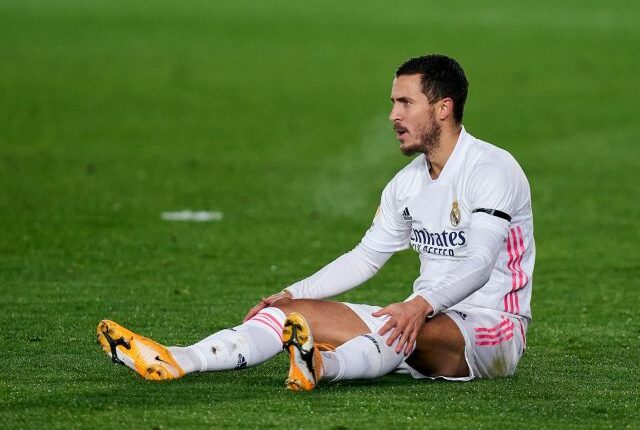 Eden Hazard was subbed on against Real’s La Liga fixture against Elche and played the last 15 minutes, initiating a return following a six-week absence. According to the club officials, he will probably be out for an additional six weeks, this time in the wake of stressing his psoas muscle, which controls the lifting of the upper leg.

Hazard joined Real Madrid in the late spring of 2019, expecting to fill Cristiano Ronaldo’s shoes for an underlying transfer fee of £100 million. From that point forward, He has since missed over half of the Blancos’ matches since signing and has just played four full 90-minute games for the club, all last season.

Hazard has missed more games due to injury at Real Madrid in two seasons than he did at Chelsea in seven. He has suffered a total of 4 muscle injuries, 2 knocks, 1 hamstring injury, 1 hairline fracture, and a fissure in the fibula resulting in 51 missed out matches.

According to The Sun, Hazard reportedly wants another ankle operation as he bids to end his ongoing injury nightmare at Real. Dr. Jose Gonzalez, who works for Atletico Madrid, has warned this could result at the end of the Belgian’s career.


Gonzalez told Ondacero: “Hazard has to train with the team for up to 10 training sessions. In my experience, it is difficult for him to return to playing at his level with Real Madrid this season.

“If a player returns after a long injury without having hardly trained, the most normal thing is that he is injured again.
“He has anxiety, he wants to show that he is worth and wants to give 100%, and he is not there for that.”

He additionally has only been able to score four goals in 36 appearances in all competitions, much of that because it takes time for a player to get back up to pace and acquire their form before. Still, in Hazard’s case with consistent injuries, it has not been a great experience for him.

For Hazard, meanwhile, there can only be sympathy. What initially was meant to be one of the biggest transfers of the year, has instead become a nightmare; both for the player and the club.

COVID-19 Pandemic Leads to ‘Sleep Pandemic’ among the Children