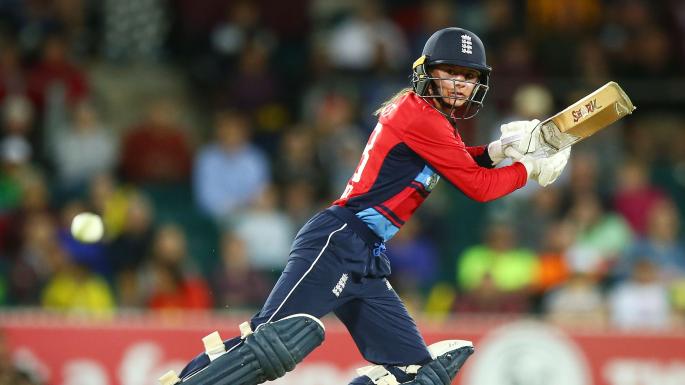 Batting first, India got off to a solid start as Mithali Raj and Smriti Mandhana scored 129 runs for the first wicket in 13 overs. Mandhana’s aggressive innings of 76 runs off just 40 balls was brought to an end by Natalie Sciver in the 13th over. Two overs later Mithali Raj departed for 53 runs off 43 balls as India slipped to 141 runs for two wickets.

Skipper Harmanpreet Kaur kept one end secured with her cameo of 30 runs off 22 balls but India’s run-rate in the death overs dipped thanks to England’s fine death overs bowling. The young sensation, Pooja Vastrakar then took the reins in her hands in the last three overs to propel India close to the 200-run mark. Vastrakar finished the innings with 22 runs not out off just 10 balls.

England began their chase in empathetic fashion all thanks to Danielle Wyatt ‘s incredible hitting abilities. She scored 61 runs for the first wicket in 32 balls with Bryony Smith (15 runs off 11 balls) and then stitched the match-winning partnership of 96 runs with Tammy Beaumont (35 runs off 23 balls) for the second wicket.

Danielle Wyatt assault finally came to an end in the 17th over but by then she had closed the doors for India with her 15 fours and five sixes.
Sciver (12 runs off nine balls) and HC Knight (eight runs off five balls) completed the proceedings and helped England register a record chase.
With this win, England have moved to number one spot in the points table with two wins in two games. India, meanwhile have sunk to the bottom as they have lost both their games.

Everything you need to know about 2019 ICC world cup: Previous champions