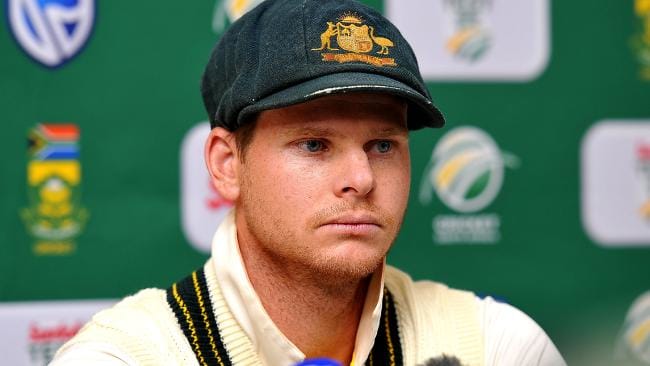 Australia cricket team captain Steve Smith accepted ball tampering charges by saying that it was a decision taken by the team leader and they were fully aware of Cameron Bancroft’s actions which were spotted by live cameras during the third day of the third Test between South Africa and Australia.

The Australian captain opened up about the entire ball tampering incident in the post-day press conference which he attended along with Bancroft. In the beginning, Bancroft admitted his role in the incident and said that he had a word with the umpires and he accepts the charging of ball tampering.
Smith then jumped in to cover Bancroft and said that the incident wasn’t one player’s role and in fact, the leadership knew about it from earlier.

Smith said that the decision to tamper with the ball to gain some reverse swing was taken by the team leadership collectively as they felt they weren’t getting any assistance from the conditions to reverse swing the ball and the game was slipping from their hands. So they decided to take this measure and indulged in cheating to get an advantage in the game.

Smith also said that he regrets committing this act and is ashamed of doing it. The Australia cricket team captain also made it clear that this was the first time they used these measures and he won’t do it ever in future.

But it seems that Smith and his teammates will receive heavy punishments for this act as they are receiving serious criticism from cricket world as well as their fellow countrymen.

The ball tampering issue came to limelight when video replays showed Bancroft taking out an external object and rubbing it on the match ball. As these visuals were shown on TV, Darren Lehman, Australia’s coach conveyed something on a walkie-talkie to a substitute player who then had word with Bancroft. After this, Bancroft removed that object which looked to be yellow in color and shoved it in his trousers.