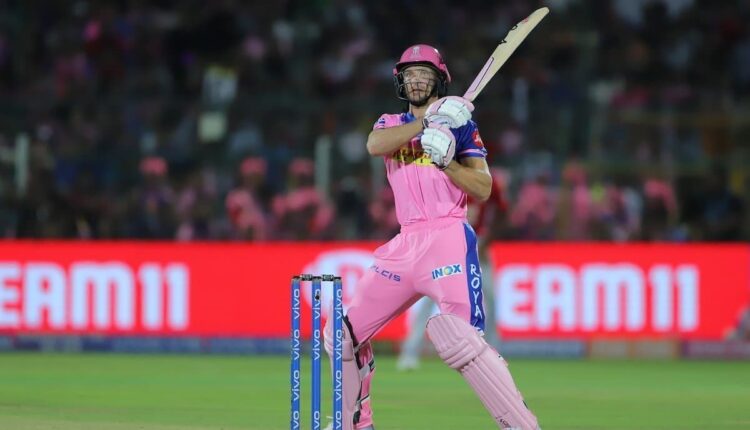 Chris Gayle and Jos Buttler has have been matching each other in the recent times and they continued this habit in the RR vs KXIP match in IPL 2019.

In the recently concluded ODI series between Windies and England, Gayle and Buttler scored breath-taking hundreds and went for a six hitting spree. And at Jaipur they continued from where they left.

Chris Gayle took the initiative and scored 79 runs off 47 balls. Interestingly he started off slowly and looked rusty in the beginning. He scored his first boundary off his sixth ball and that too not from the middle of his bat.

Till the 10th over, Gayle had faced 29 balls and had scored just 34 runs but then he unleashed himself and tore apart Jaydev Unadkat in the 11th over. He slammed three consecutive fours and on fourth ball nailed a six on the sightscreen.

From there on Gayle took off and went berserk. It took a sensational fielding effort from Rahul Tripathi to finish Gayle’s assault in the 16th over.

The Rajasthan’s opening batsman slammed Shami for two fours in the third over and smashed one four and a six against Mujeeb Ur Rehman in the next over.

He was severe against Sam Curran as he clobbered him for 19 runs in the sixth over with three fours and a six.

However just when Buttler had settled down nicely and was in ominous touch, R Ashwin ran him out in the Mankad style.

Just when everyone thought they have seen all the drama in the match, Rajasthan batsman showcased an epic batting collapse to lose the match from a wining position.

With 37 needed of 21 balls and eight wickets in hand, Curran sent back Smith and one ball later dismissed Samson.

In the next over, Mujeeb delivered the decisive punch by dismissing Stokes and also sent back Tripathi. With four wickets in 2 overs, panic was everywhere in Royals’ doughout and this resulted in Archer’s run-out in the 19th over.

Ankit Rajpoot provided closing blows by getting rid of Unadkat and Gowtham on successive deliveries in the 20th over.

Royals lost five wickets in span of 12 balls and this is where Punjab won the game.

Reliance Jio GigaFiber broadband – Here is how to register online