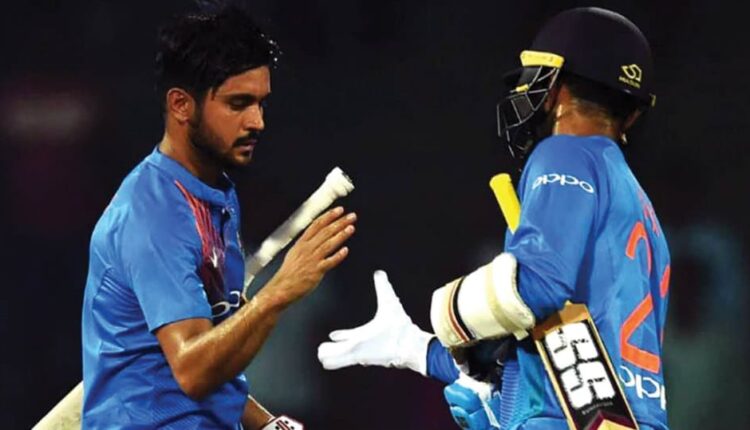 Courtesy of solid performances by youngsters Shardul Thakur and Manish Pandey, India thumped Sri Lanka by six wickets in the Nidahas Trophy to register their second win in three matches. The game was reduced to 19 overs per side due to delay by rain.

Batting first, Sri Lanka got off to a flying start as their openers Danushka Gunathilaka and Kusal Mendis ransacked 25 runs in the first two overs. Gunathalika’s cameo of 17 runs off 8 balls came to an end when Suresh Raina pulled off an absolute stunner at mid-wicket. Diving to his left, Raina grabbed the ball in his hand and delivered India and Thakur, first wicket of the evening.

India then chipped in with wickets from the other end while Mendis continued to punish Indian bowlers. Mendis’ aggressive knock of 55 runs off 38 balls came to an end when he handed a simple catch to Rohit Sharma on Yuzvendra Chahal’s bowling in the 15th over. Sri Lanka were 120 for six wickets at that moment and from there on their innings imploded.

Thakur grabbed four wickets and conceded just 27 runs to ensure Sri Lanka were restricted to a below par score of 153. Washington Sundar continued to impress with his off-spin bowling and ended the innings with figures of two wickets for 21 runs in four overs.

During India’s chase, Indian openers, Shikhar Dhawan and Rohit Sharma departed early but Suresh Raina’s flamboyant 27 runs off just 15 balls repaired the damage and laid the foundation of win. KL Rahul who was roped in for this game at the place of Rishabh Pant failed to make an impact and scored just 18 runs off 17 balls.

Manish Pandey’s claim for a spot in India’s full strength side became stronger as he stood not out at 42 runs and steered India home. Dinesh Karthik gave him able support and scored 39 not out of 25 balls. The duo added 68 runs for the fourth wicket and helped India cross the line in the 18th over. Akila Dananjaya was the lone Sri Lankan bowler to impress as he gave away only 19 runs in his four overs and accounted for both Indian openers.
With this win, India reached the top spot in the points table and have four points in three games.