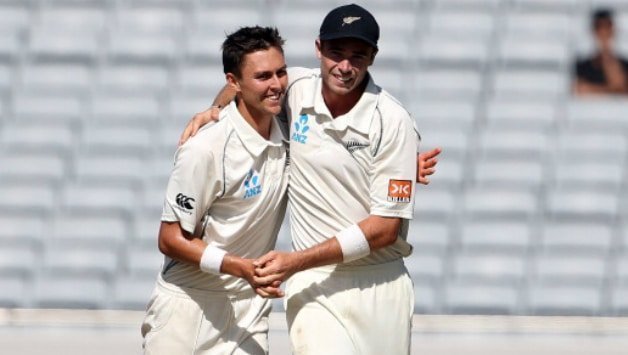 New Zealand vs England 1st Test: Boult, Southee, and Williamson tear apart England
England couldn’t have started the Test series against New Zealand on a worse note than this as after only 90 overs of play, the visitors are 117 runs behind New Zealand.

Trent Boult’s thunderous spell of six wickets for 32 along with Tim Southee’s four wickets bundled out England for just 58 runs and then Kane Williamson’s solid 91 not out has taken the hosts to 175 for three wickets at the end of day one.

New Zealand won the toss and elected to bowl first but for the first four overs, nothing happened. Then on the second ball of the fifth over, Boult found Alastair Cook’s outside edge and things started to fall apart for England.

Boult discovered the perfect length on the pitch to ensure the pink ball swung in the air and his accuracy meant England batsmen had to play at most of those incredible deliveries. He sent back Joe Root and DJ Malan in his next overs and to England’s misery, Tim Southee joined Boult to enhance the havoc.

The duo of Boult and Southee were so effective that New Zealand didn’t require a third bowler. England’s agony came to an end in the 21st over as they were all out for just 58 runs. Boult picked up six wickets while Southee grabbed four. Craig Overton top scored with 33 not out and courtesy of his innings England lifted the score to some decency after being at nine wickets for 27 runs.

New Zealand started their response on a cautious note but Jeet Raval fell for just three runs in the ninth over to James Anderson and England sensed an opening. But Kane Williamson and Tom Latham (26 runs) batted out the threat of new ball and restored normalcy. The pair added 84 runs for the second wicket before Stuart Broad removed Latham.

England then dismissed Ross Taylor (20 runs) cheaply but Henry Nicholls (24 not out) gave able company to Williamson and ensured New Zealand finished the day without any further damage.

At Stumps on day one, Kane Williamson is playing on 91 not out while New Zealand are at 175 for three wickets.