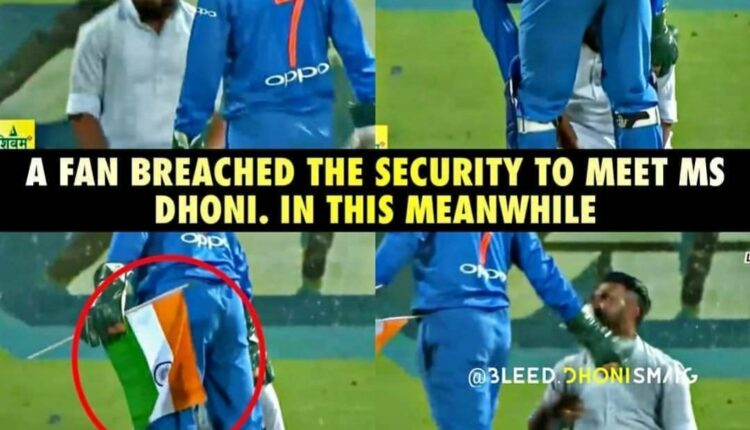 An Indian fan carrying Indian flag ran towards MS Dhoni to touch his feet during the first innings of New Zealand in the third t20 match which was played in Hamilton, New Zealand. As the fan kneeled down to touch Dhoni feet, MSDhoni noticed that the Indian flag was about to touch the ground.

Dhoni immediately took the tricolour from the fan hand. Team India and MS Dhoni fan following are immense around the world. The same was visible during the 3rd t20 international when the fan, broke down the security and ran towards MSDhoni to touch his feet. During the whole tour, a fan came out in large numbers to support the Indian team. With MSDhoni reaching the twilight of his career, fans filled the stadium with MS Dhoni name chanting all around the stadium.

Dhoni is such a kind-hearted and humble person by nature that his fan following is immensely appreciated. From all over the world people come to watch his batting, wicket keeping skills. Today, yet another time he displaced the bails in 0.099sec.

in the over of Kuldeep Yadav to dismiss Kivi batsmen. During the third t20 though one of the fans broke the ground security to see and touch the feet of his idol. The incident happened when MSDhoni was behind the stumps doing his job promptly.

Suddenly an Indian fan ran towards him to touch his feet. Many times this incident happened on various grounds all over the world. MSDhoni is in the crucial part of his career then also he is making records and records under his name.

PUBG – “A demon in every house”