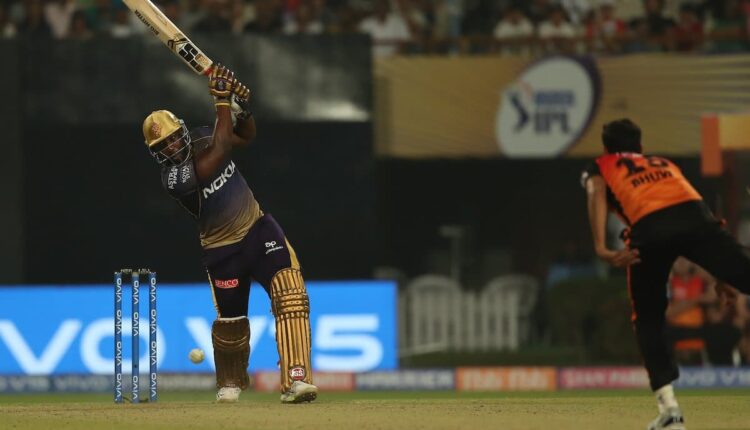 For most part of the match, it looked like a dream-like comeback for David Warner. The left-hand batsman batted with his trade-mark punches and drives and gave Hyderabad a flying start.

He looked set for a hundred and SRH were looking good for a 200-plus finish but then Andre Russell struck with the ball. A stunning catch by Uthappa on Russell’s bowling ended Warner’s innings on 85 and after that Hyderabad scored just 37 runs in 24 balls.

Russell then delivered another blow by sending back dangerous Yusuf Pathan in his next over. A clever change of pace did the trick and Pathan was castled.

In the chase of 181, it seemed that KKR were always a little short and when it came down to 53 runs off 18 balls everything looked over for the home team.

And that’s when Dre Russ switched on his beast mode.

Russell hammered Siddarth Kaul for back to back sixes on the first two balls of the 18th over and then slammed a four on the fifth ball. With 19 runs of that over, Russell virtually poured life back in the contest.

However the biggest challenge was in the next over which was bowled by Bhuvaneshwar Kumar. Bhuvi had so far nailed his yorkers and had given just 15 runs in his three overs.

But then Russell clobbered him for 14 runs off his first three balls with two fours and a six. The Windies batsman missed the next ball but made up for it by hitting an incredible six off the fifth ball.

And with 13 runs to get off the last six balls, Shubman Gill struck two sixes to seal the win.

Russell man of the match for his all-round effort

The KKR all-rounder picked two wickets and remained not out on 49 runs off just 19 balls. His imperious hitting and smart bowling was the difference between the two teams and hence he was the man of the match for this game.

KXIP vs RR IPL 2019: Three key battles you shouldn’t miss out on