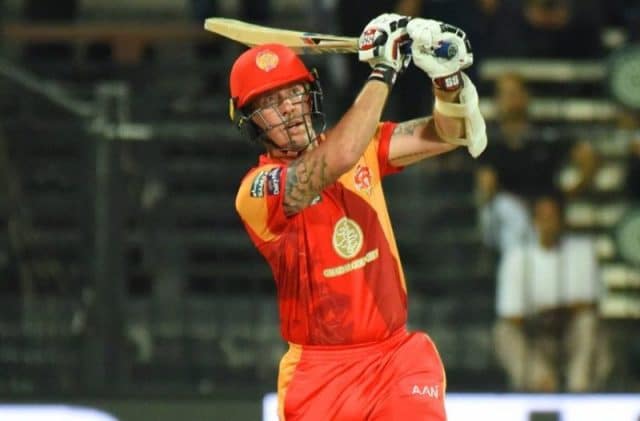 With little support from the other end, Kieron Pollard hammered 73 runs off 47 balls and threatened to steer Multan Sultans home in the chase of 186 but Islamabad United kept cool and restricted Multan to 152. With this win, Islamabad has also booked a place in the qualifiers.

While chasing 186, Pollard arrived at the crease when Multan was tottering at four wickets down for 20 runs in the powerplays. But Pollard batted cautiously and repaired the damage by adding thirty runs with Shoaib Malik and 40 runs with Ross Whiteley for the fifth and sixth wicket respectively.

But lack of quick runs from the other end meant Pollard had to do everything on his own and he crumbled to this pressure in the 18th over. He handed a simple catch to Alex Hales at deep square leg while looking to play a big shot against Mohammad Sami.

Faheem Ashraf picked up two wickets and conceded only 27 runs in his four overs while Samit Patel grabbed two wickets in his only two overs in powerplays. Patel picked up the big wicket of Kumar Sangakkara in the first over of the innings and trapped Saif Badar in front of wickets in the same over to leave Multan at two wickets for two runs in one over.

Earlier in the evening, Luke Ronchi’s and Alex Hales’ stunning batting propelled Islamabad to 185 runs in 20 overs. Ronchi hammered 58 runs off 36 balls and earned the man-of-the-match award for his swashbuckling knock. Hales scored 46 runs from 33 balls and was part of 45 runs partnership off 35 balls with Ronchi for the second wicket.

Hussain Talat then provided the finishing blows. His cameo of 36 runs off 21 balls was instrumental for Islamabad for adding more than ninety runs in the last nine overs. Umar Gl was the pick of the bowlers from Multan as he gave away only 26 runs in his four overs and claimed two wickets as well.