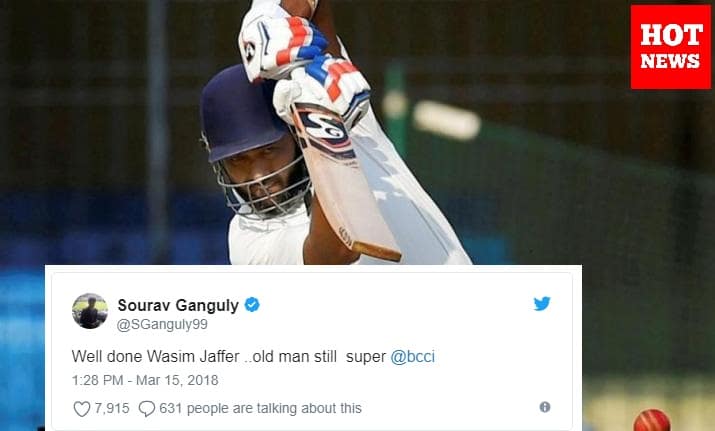 Wasim Jaffer scored the highest individual score in Irani cup by amassing 285 runs at Nagpur against Rest Of India and also completed 18,000 first-class runs. This phenomenal achievement by Jaffer has brought him into the limelight and the cricket fraternity is busy showering praises on the veteran cricketer.

Former Indian captain Saurav Ganguly was among the first ones to react to Wasim Jaffer’s phenomenal performance and he applauded the Vidarbha batsman for battling age and still playing well.

Ayaz Menon, a veteran cricket journalist also congratulated Jaffer for his achievement. Menon uses Twitter with the handle name, ‘Cricketwallah’ and was once again very creative with his choice of words. He congratulated Jaffer by focusing on the fact that Jaffer’s hunger for scoring runs is still strong and age has made little impact on his batting abilities.

Double century for Wasim Jaffer. Class, composure and commitment to the game #iranitrophy

Another cricket presenter, Vikram Sathye too appreciated Jaffer for completing 18,000 runs in first-class cricket. In his congratulatory tweet, Sathye talked about how little appreciation Jaffer gets and demanded that Wasim Jaffer should be celebrated more as he has plenty of achievements in his name. He also appreciated the 40-year-old batsman for staying strong despite not getting enough opportunities in the national team.

Age 40, 53 first class century, highest run getter in Irani Trophy this man needs to be celebrated more than he actually is. Didn’t get bogged down because of lack of Indian selection . Just batted on. Take a bow #Wasimjaffer

VVS Laxman, Jaffer’s teammate in India’s national team was happy to see Jaffer’s commitment and he enjoyed watching Jaffer score yet another hundred. He tweeted that it was good to see the ease with which Jaffer scored his runs.

Really good to see Wasim Jaffer score another ? with so much ease. Its also great to see him so committed even at this stage of his career. #inspiration

Another former Indian player, Mohammad Kaif also congratulated Jaffer for his scintillating performance. Kaif brought to notice the fact that Jaffer’s record-breaking knock came against a bowling attack that included R Ashwin, a world-class spin bowler. Kaif tweeted that Jaffer is nothing less than an inspiration.

Wasim Jaffer is an inspiration. At 40, has scored a brilliant double hundred against a Rest of India attack also compromising Ashwin.

Harbhajan Singh too tweeted his appreciation for Jaffer and also remarked that he should have played for India’s national team for some more duration.

Congratulations Wasim Jaffer 200 not out and 18000 first class runs and still going strong.. he should have played for bit longer for Team India ?? #perfectplayer #Topplayer ⭐️⭐️⭐️⭐️⭐️ Vidrabha vs rest of india #iranitrophy @BCCIdomestic @BCCI