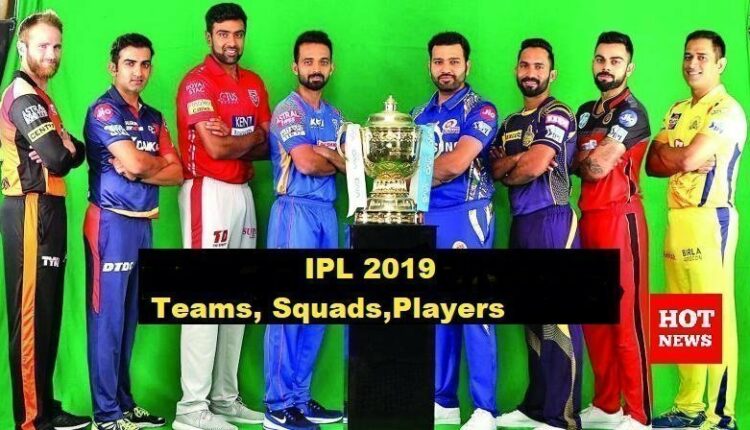 Unlike previous seasons of IPL, this season begins in the month of March 2019 because of forthcoming General Elections (scheduled to be held in the months of April and May 2019) and ICC Cricket World Cup (30th May 2019 to 14th July 2019).

Out of 1003 players who registered for 70 spots available in 8 franchisees, 200 players were capped, 3 players were from associate nations (countries associated for cricket purposes, or a geographical area, which do not qualify as Full Members, but where cricket is firmly established and organized) and the rest (800) were uncapped. 50 of these spots were reserved for Indian players and 20 for players from other countries.

The auction of players for these 70 spots was held on 18th December 2018 and out of 70 players, Rs 106.86 Crores was spent on 60 players. While Jaydev Unadkat and Varun Chakravarthy occupied the joint position of the most expensive Indian Players and pocketed Rs 8.4 crores each, Sam Curran of England was the most expensive foreign player and was bought for Rs 7.2 crore by Kings XI Punjab.

A complete list of the IPL 2019 teams and players is mentioned below.

The Defending Champions and three-time IPL winners, CSK hold a record of the highest number of appearances both in the playoffs (nine times) and the finals (seven times). Also considered as the most valuable franchisee, CSK has a brand value of $65 million (in the year 2018). With a strength of 25 players and retaining most of them from the previous season, fast bowler Mohit Sharma and Ruturaj Gaikwad are an addition to Dhoni’s squad.

Formerly known as Delhi Daredevils, there are ten new additions to Shreyas’s 24-member team. Having not clinched even a single IPL Trophy, the team acquired Shikhar Dhawan, who was earlier a part of Sunrisers Hyderabad, during the transfer window and let go off Vijay Shankar, Abhishek Sharma and Shahbaz Nadeem. Replacing Glenn Maxwell, Jason Roy, and Liam Plunkett, the team is joined by players like Keemo Paul, Sherfane Rutherford and Colin Ingram.

Making it to the finals only once, in 2014, Kings XI Punjab has had some major changes in a team this year. Retaining ten players from the previous season’s team, the team chose to purchase thirteen more players. Since the team was heavily dependent on KL Rahul for fetching runs last year, they have acquired Sam Curran and Moises Henriques to strengthen their batting order.

Immensely popular because of owners like Shah Rukh Khan and Juhi Chawla, KKR has clinched the IPL Trophy twice. With a squad of 21, the team retained 13 players from the previous season’s team and purchased 8 new players. Although they had an intense tussle for Carlos Brathwaite, most of their foreign purchases were easy and cheap. Lockie Ferguson, Anrich Nortje was added to the squad to strengthen the bowling.

Owned by the Richest Man of India, Mukesh Ambani, MI has added 6 new players from the auction. Having traded Quinton De Kock from RCB, Yuvraj Singh and Sri Lankan pacer Lasith Malinga will be joining Rohit Sharma’s 24-member squad. The three-time IPL Champions have made very little changes in the team and have retained most of the players from the previous season’s team.

The first IPL winners, Rajasthan Royals, and are known to purchase players that are not very famous, unknown or uncapped (not played for their nation). For example, leg spinner, Pravin Tambe, whose performance in IPL, earned him a place in Mumbai’s team for Ranji Trophy at 42 years of age, was a member of Rajasthan Royals. The team has added 9 players to Rahane’s 25-member squad along with acquiring Jayadev Unadkat at Rs 8.4 Crores, one of the two most expensive Indian players of the 2019 IPL Auction.

RCB is considered as one of the best teams on papers. Although they have reached the finals of Indian Premier League thrice, they have failed to win even a single IPL Trophy. Having ace batsmen like Virat Kohli, AB de Villers, Moeen Ali, Marcus Stoinis, the team has a record of scoring both the highest (263/5) and the lowest totals (49) in IPL. Players like Shimron Hetmyer, Shivam Dube and 7 others are the new additions to Kohli’s squad.

Playing for the first time in the year 2013, the SRH was founded after Deccan Chargers was terminated in the year 2012. Since its inception, the team has made two appearances in the finals (champions in the year 2016 and finalists in 2018). After trading off Shikhar Dhawan, the team acquired left-arm bowler, Shahbaz Nadeem, Vijay Shankar, and Abhishek Sharma. Retaining 17 players (3 via trade), letting go of 9 players and purchasing three more players, the squad strength of SRH adds up to 23.

Kareena And Priyanka on Koffee With Karan : Kareena Warns Priyanka Not To Forget Roots!