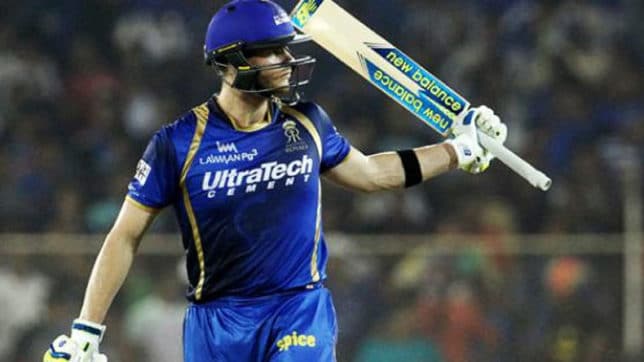 The repercussions of the ball tampering controversy have started to haunt Steve Smith as he is forced to step down from the captaincy of Rajasthan Royals, the IPL franchise, Smith is set to represent in this year’s IPL. According to Rajasthan Royals, now Ajinkya Rahane will lead the franchise in IPL 2018.

This development comes after Cricket Australia asked Tim Paine to lead Australia for the remaining part of the 3rd Test against South Africa as Steve Smith stood down from captaincy post of Australia’s national cricket team.

Cricket Australia’s decision to take the ball tampering incident seriously and to penalize Smith heavily for this act had made it clear that Smith won’t be leading Rajasthan Royals in IPL. The only question was when RR would announce it. But Smith has himself decided to step down from the post, making it easy for Royals to arrive at a decision.

Rajasthan Royals made the news public with a press release which stated Smith’s views on the issue. According to the press release, Smith feels that this decision is in the best interest of the team as the team needs to focus on cricket and prepare for the tournament.

Rajasthan Royals’ Twitter handle tweeted the news that Ajinkya Rahane will be captaining the IPL franchise for the IPL 2018. The tweet also had a quote by the co-owner of the team.

‘The game is bigger than any individual and we hold this thought close to our heart.”- Manoj Badale , the co-owner of Rajasthan Royals.

The ball tampering issue happened on the 3rd day of the 3rd Test between Australia and South Africa when Cameron Bancroft was caught by the cameras using a foreign object to change the condition of the ball.

Smith at the end of the day, took full responsibility of the issue and said that the incident was a decision taken by the ‘team leadership’ and it was a planned move by them.