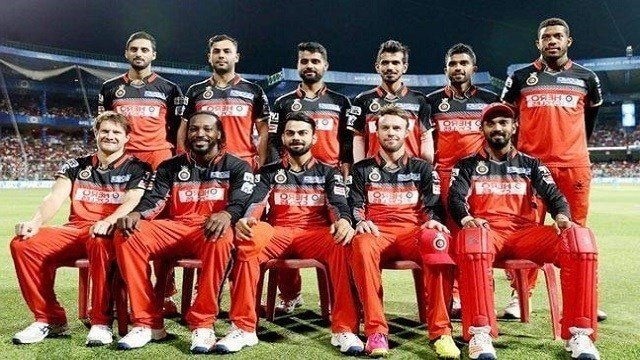 Royal Challengers Bangalore is one of the most popular franchises in IPL but they still don’t have a trophy in their cabinet. The team has some of the best batsmen in the world but their poor bowling department has cost them dearly at times. This year though, they come up with a balanced side.

Crest and Color- The letters R and C in golden color in red background form the logo for RCB.

Virat Kohli- International cricket’s poster boy and the most consistent batsmen across all formats, Virat Kohli is much more than a run machine. He is the fittest, most consistent and arguably the most win-hungry cricketer present in world cricket at the moment. He is charismatic, flamboyant and relentlessly aggressive. He will surely be RCB’s ace weapon this season.

Chris Gayle- The Universe Boss, Chris Gayle made for RCB as a replacement for an injured bowler but ended the season as the highest run-getter. Gayle makes six-hitting extremely easy and his big scores generally finish the game. A dip in form means he is no more part of RCB’s squad.

AB de Villiers– RCB’s most reliable and famous overseas player, ABD is a maverick with bat and in the field. He plays some of the most innovate strokes and makes runs at will.

Anil Kumble- Kumble was regarded as a wrong fit in a T20 side but he silenced critics by picking up a five-wicket haul leading the team to the finals. Jumbo was a true sensation by all means.