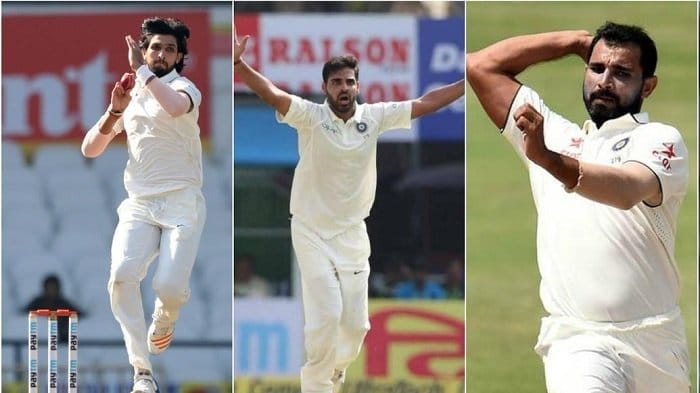 Indian Pace Attack: Best in the world: Although India always had a formidable batting line up and an excellent spin attack, its overseas win record used to be very poor because it did not have a strong pace attack.

The situation has changed dramatically in the last year or so. Series against South Africa and England in 2018 and against Australia in 2019 has broken the myth that India cannot produce world-class fast bowlers.

Today, India has a bunch of 6 to 7 world class fast bowlers whose sight can put fears in the minds of any batting line in the world. These bowlers are strong, fast, ruthless and aggressive.

This group is led by Jasprit Bumrah who is the most fearsome of the lot and is India’s best bowler in all formats of cricket. Bumrah made his IPL debut in 2013 for Mumbai Indians and played alongside Lasith Malinga who is known for his slinging arm action and lethal yorkers. Malinga’s company made Bumrah the lethal bowler that he is today. He is ranked No. 1 bowler in the world in ODIs and has guided India to many victories in tests, ODIs, and T20s.

Mohammed Shami, Ishant Sharma, Bhuvneshwar Kumar, and Umesh Yadav are other fast bowlers who have helped India win matches in overseas conditions consistently in recent past.

Ishant Sharma plays only test cricket these days and is the senior most pacer in the Indian test team and plays the role of a mentor in the team. The 6 ft 4 in tall pacer has played 90 test matches and has taken 267 wickets in tests.

Mohammed Shami is known for his “hitting the deck hard” ability and consistently clocks over 140 km/hr. He has represented India in 40 test matches and 59 ODIs. He is the fastest Indian to claim 100 ODI wickets. He achieved this feat in his 56th ODI. While his talent was never in doubt, he had to overcome a spate of injuries and personal problems to re-assert his claim as one of India’s premier fast bowlers.

Bhuvneshwar Kumar is another important member of the group and is known for his bowling in death overs and control over swing. He has a knack of breaking partnerships and picking important wickets.

Umesh Yadav is fast and lethal and consistently bowls around the off stump but is not as economical and as consistent as Bumrah, Ishant, Shami, and Bhuvneshwar.

Besides the above five, we have Hardik Pandya, an allrounder who is an excellent fast bowler and a regular member of the Indian team.

Mohammed Siraj, Khaleel Ahmed, Vijay Shankar, and Siddarth Kaul are few others waiting in the wings for their turn.

Overall, Indian fast bowling has never been as good as it is today and series win against Australia (first in India’s test cricket history) and test wins against South Africa and England are a testimony of this fact.