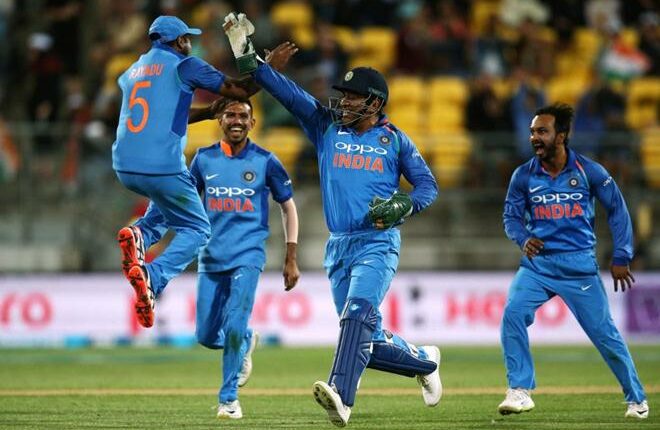 After losing the 4th ODI comprehensively, India bounced back to beat New Zealand by 35 runs in the 5th ODI, thus wrapping up the series 4-1. The Indian team included MS Dhoni and Mohammed Shami in the final ODI. While Shami bowled brilliantly and picked up 2 wickets for 35 runs, Dhoni effected a crucial run out by sending back a rampaging Neesham.

Indian innings got off to a disastrous start when they lost four wickets for nothing. Captain Rohit Sharma was bowled by Matt Henry for 2, Shikhar Dhawan was out for 6, top-edging a Trent Boult delivery in the hands of Matt Henry, Shubman Gill had another bad day at the office when he was caught by Mitchell Santner off Matt Henry and ever reliable Dhoni was bowled by Trent Boult.

Kiwis lost three early wickets but Captain Williamson and Latham stitched a 77 runs partnership for the fourth wicket before Williamson holed out to Shikhar Dhawan off Jadhav. Soon Latham was also consumed by Chahal before Neesham scored a quick 44 off 32 deliveries to bring New Zealand closer to victory.

A bizzare run out of Neesham by Dhoni brought India back in the game and New Zealand innings wrapped up at 217 which gave India a victory by 35 runs.

Aashiqui 3 is releasing on 14th February : Know about the legacy of Aashiqui

IND vs NZ: Winners and Losers from India’s Tour of New Zealand