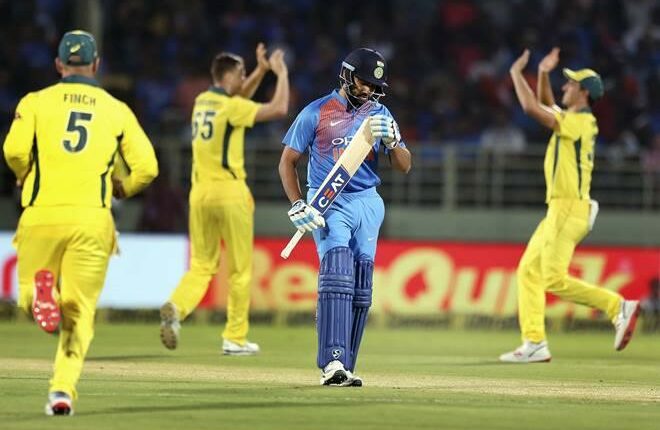 India vs Australia 1st T-20I : The first match of the T-20 series between India and Australia was played at Vishakhapatnam which India lost by 3 wickets because of their poor batting display. They scored 126 runs for the loss of 7 wickets, a score which even Australia found difficult to chase. Australia eventually scampered home with three wickets in hand.

Nathan Coulter Nile was the standout bowler of the Aussies and captured crucial wickets at regular intervals. He won the man of the match award. Maxwell was their highest scorer. He scored 56 runs.

India lost the toss and were sent in to bat by Aaron Finch, the Aussie captain.  The series marked the return of Indian captain, Virat Kohli who was rested midway through the New Zealand series. KL Rahul also returned to the Indian line up along with Umesh Yadav. Mayank Markande, a leg spinner from Punjab, made his debut. Shikhar Dhawan, Vijay Shankar and Bhuvneshwar Kumar were rested while Hardik Pandya couldn’t play owing to an injury.

India had a sedate start and scored only one run in the first over and it lost its vice-captain Rohit Sharma early for 5 runs when he was caught by Adam Zampa off Jason Behrendroff.

Kohli arrived at the crease and he and Rahul scored runs freely but when it looked that India will set an imposing target for the Aussies, Kohli was caught by Coulter-Nile off Adam Zampa in the deep. Kohli had scored 24 and was involved in a 55-run partnership with KL Rahul.  Rishab Pant also went early when he was brilliantly run out by Beherendorff.

Dhoni’s arrival at the crease was greeted with thunderous applause from the crowd. KL Rahul completed his 50 but he was soon out when he tried to scoop Coulter-Nile but couldn’t get past Aaron Finch. Rahul scored 6 fours and a six and the way he batted and scored freely on both sides of the wickets, it showed that staying away from the game had not curbed his aggressive instincts.

Karthik came and went when Coulter-Nile breached his defence. Nile also consumed Krunal Pandya for 1 when the latter tried to pull him but only managed to give a simple catch to Maxwell.

India’s long tail was exposed at this point and the innings folded at 126 for 7.

Australia lost two early wickets. Make shift opener Marcus Stoinis was run out and skipper Aaron Finch was declared lbw to Bumrah. Aaron Finch’s dismissal brought Maxwell to the crease and he started scoring runs freely. When it seemed that Aussies will achieve the target easily, Maxwell was dismissed for 56 when he was caught by Rahul off Chahal. He was involved in a stand of 86 runs with D’Arcy Short. Turner went without troubling the scorers.

Australia needed to score 16 runs off the last two overs. Bumrah bowled the penultimate over and picked up two wickets and gave just two runs.  He first had Handscomb caught behind and then bowled Coulter-Nile.

Yadav, who bowled the last over, had 14 runs to defend against Cummins and Richardson but he couldn’t contain the two and India eventually lost the match.