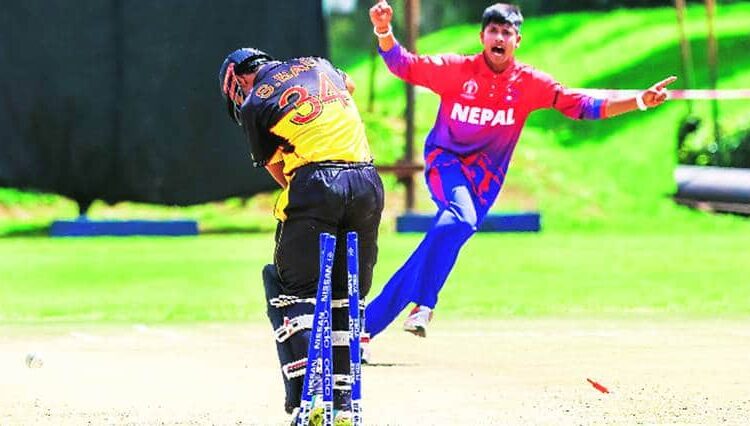 Nepal probably had their best day in international cricket as Nepal beat PNG in the ICC world cup qualifiers at Harare and became the latest country to gain ODI status.

Nepal’s historic win was powered by Dipendra Singh Airee’s all-around contribution. The off-break bowler first picked up four wickets with the ball and then scored 50 not out with the bat to steer his team home.

For Nepal, everything went right on Thursday. Firstly, they won the toss and made the right decision of bowling. The pace duo of Sompal Kami and Karan KC made effective use of the new ball and bowled in the right areas to send back PNG’s openers cheaply.

Nepal’s star cricketer and lead spinner Sandeep Lamichhane then weaved a trap with his tight bowling and routed PNG’s middle order. He picked up a wicket each in his four consecutive overs and kept PNG on the back-foot. Lamichhane finished the game with impressive figures of four wickets for 29 runs.

Dipendra Singh Airee then joined the party and wrapped PNG’s tail in no time. He claimed four wickets and gave away only 14 runs in his spell of 4.2 overs.

While chasing a small target of 115, Nepal lost their top order batsmen very early and the team was in a spot of bother with the score at three wickets down for 35 runs. Airee then took control of the proceedings and repaired the damage by tagging with Aarif Sheik.

The duo of Sheik and Airee added 67 runs for the fourth wicket and brought curtains on the game. Sheik was trapped in front of the wickets by Norman Vanua in the 21st over. Sheik scored 26 runs off 42 balls.

Airee completed the proceedings with RK Paudel (03 not out of 06 balls) in the 23rd over and registered a thumping win for Nepal. Airee stood not out on 50 runs off 58 balls.

This massive win has won Nepal ODI status and has paved way for their staggering growth in future.