After Defeating India in T20 Match, Australian Team Bus Got Attacked By Stone In Guwahati 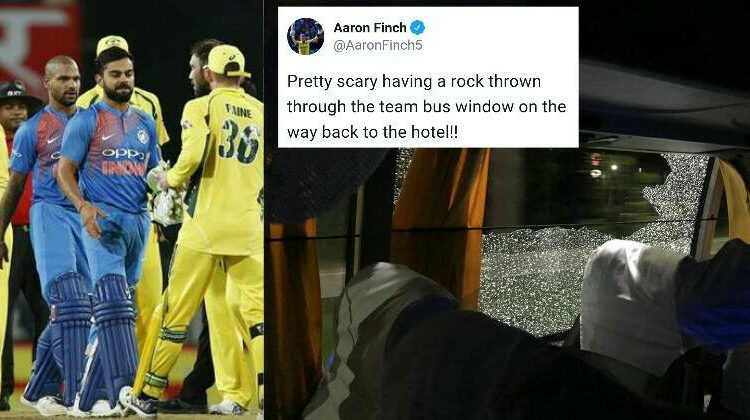 Cricket is called gentleman’s game. Any sport is all about winning and losing, but some people don’t even understand the basic nature of a sport. A very unfortunate incident toll place on Wednesday after Australia defeated India in the second T20 game of the Three match T20 series. Australia defeated Team India by 8 wickets. This didn’t go down well with few fans, as The bus carrying Australian Team was attacked by stone in Guwahati. Yes, this is right, rock was thrown on the team bus.

Australia started off pretty well, as they dismissed star batsman Rohit Sharma and Virat Kohli in the first over. Jason Behrendorff had an amazing day, as he finished his spell with four-fer. India was all out on 118 and set a target of 119 to win for Australia. Australian team did flutter a bit, as they lost two wickets in quick succession. But Moises Henriques and Travis Head played very sensible and took the match home very comfortably. Australia won the match by 8 wickets. Now, the three-match T20 International Series between India and Australia tied the series 1-1. Overall, Australia dominated the entire match, they didn’t leave anything for the Indians. It was an easy win and would boost their morale a lot.

It seems that the defeat didn’t go down well with Indian fans, as things turned out to be very ugly. After the match, when Australian team was traveling back to their hotel, it was hot with a rock. Aaron Finch Twitted about this incident.  Thank God, no one was hurt in this unfortunate incident. Following the incident, the security of the hotel has been tightened.

Australian opener Aaron Finch took to Twitter to announce the news. His Tweet reads, “Pretty scary having a rock thrown through the team bus window on the way back to the hotel!!”

Pretty scary having a rock thrown through the team bus window on the way back to the hotel!! pic.twitter.com/LBBrksaDXI

If you are unable to see the image clearly, you can check them here.

The rock thrown at the bus broke the window. No one was hurt, as there was no one sitting on the seat next to the window. It was the first international cricket match played at the Barsapara Cricket Stadium in Guwahati in eight years.

Chief Minister of Assam has also condemned the incident in a series of Tweets, read his Tweet.

Really unfortunate incident after a great game aimed to tarnish Guwahati's reputation as emerging sports hub. We strongly condemn it. (1/8)

Vow to take strictest action against the culprits. Investigation is on full swing & Police have already picked up 2 suspects. (2/8)

Yesterday, we had a great game. We had the best audiences. People of Assam are biggest sports lovers & great hosts. (3/8)

So, whoever got indulged in the hooliganism did it on the sole objective of defaming Assam & derailing its journey towards the top. (7/8)

That's a design we will foil with the support of the people of Assam. Culprits will face full force of law & given exemplary punishment(8/8)

It is really a very sad and unfortunate incident. It should never happen to anyone. The guilty must be punished.

How to tackle Indigestion? All you need to know about it

Excessive sweating embarrass many, try these home remedies for sure