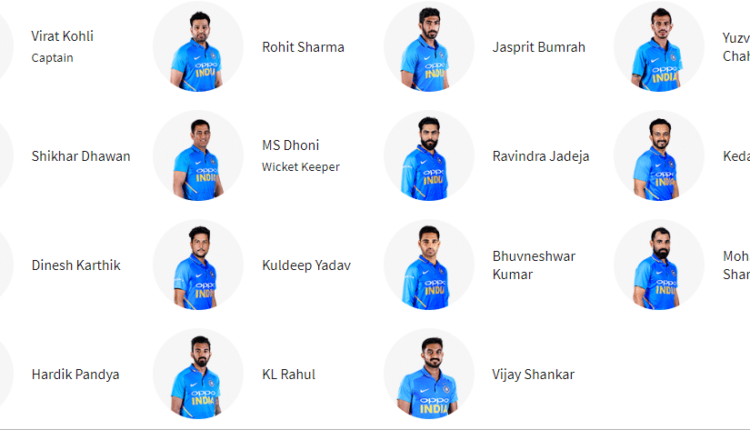 With the World Cup just six weeks away, the curiosity and excitement of Indians is at its peak. The reason being; who all will be part of the Indian squad. So, to put this excitement at rest, BCCI announced the 15 member team set to represent India for the 2019 edition of the World Cup.

The inclusion of Dinesh Karthik in place of Rishabh Pant was a bit surprising because Karthik was not part of the Indian ODI team which played against Australia in the recently concluded series.

Rohit Sharma, Shikhar Dhawan & KL Rahul are the three openers in the squad with Virat Kohli & Kedhar Jhadav, the other two specialist batsmen.

While Dhoni & Karthik are the two specialist keepers in the team, the squad has three all-rounders in Hardik Pandya, Vijay Shankar & Ravindra Jadeja.

The batting, especially the middle order, looks thin because, although we have three world-class batsmen at the top in Kohli, Rohit and Shikhar, there is no strong batsmen for the no. 4 spots. Vijay Shankar will most likely bat at this position but he has played just 9 ODIs in his career in which has scored only 165 runs at an average of 33. For a competition as important as the world cup, we require a more experienced player to bat at the crucial no 4 spot. The team may try KL Rahul also at this position but he too has not played many ODIs (14 matches with 343 runs at an average of 34.3).

Kedar Jadhav will most likely bat at no 5 spots and he has a decent ODI record with an average of 43.48 in 59 matches.

It looks likely that MS Dhoni will bat at the no. 6 spots with Hardik Pandya at no. 7 followed by four bowlers.

Inclusion of Dinesh Karthik over Pant is one selection where the opinion is divided. While one school of thought disagrees with this decision, the other defends it. As per the selectors, Dinesh Karthik has been included in the team because of his better wicket keeping skills but if this is the reason then why is Pant preferred over Karthik in tests? We all know that Pant provides the X factor to the team and can rip apart any bowling on his day, therefore, he should have made the cut.

The bowling department is well equipped. Bumrah, who is the No 1 ODI bowler in the world, will lead the bowling attack in the company of Bhuvneshwar, Shami and the rest.

Pandya, Jadeja, and Shankar are the three all-rounders in the team. While Pandya has the ability to change the course of any match on the ability of his explosive batting, bowling, and fielding, Jadeja is an ace fielder, a good batsman a wicket-taking bowler. Vijay Shankar has made the cut on the basis of his performance in the recently concluded Australia vs India series.

Although the team lacks a good middle order, the team has the capability of lifting the world cup for the third time if it plays to its full potential.

Super 30 Film : Hrithik Roshan Will Be Seen As A Mathematics Wizard Anand Kumar!