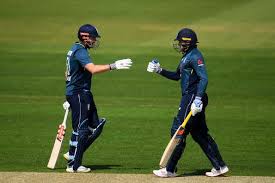 Post the delay due to rain, the match was reduced to 41 overs. What helped Sri Lanka to emerge victorious were their bowlers.  Afghanistan won the toss and chose to bowl, a plan that helped them to restrict Sri Lanka to 201. The credit for this goes to Mohammad Nabi, an ace Afghan spinner, who took 4 wickets.

And when it was the turn of Sri Lanka to bowl, at first it looked that the match is slipping away from their hands, but suddenly they found their rhythm and managed to restrict Afghanistan to 152 runs and thus emerged victorious by 34 runs. Malinga’s excellent bowling in the beginning and at the death proved crucial for Sri Lankan victory. By providing the initial breakthrough when Afghanistan openers were running away with the match and by yorking the last two batsmen, Malinga proved as to why he is one of the most feared bowlers in the world.

Nuvan Pradeep complimented Malinga well by picking four crucial wickets in the middle overs. He was declared the man of the match for his brilliant efforts with the ball.

Skipper Dimunth Karunanatne and Kusal Perera opened the innings for Sri Lanka. Karunanatne scored 30 runs off 45 balls before he was caught by Najibullah off Mohammad Nabi. Nabi went on to dismiss 3 Sri Lankan batsmen in a single over, forcing the Sri Lankans to panic. While Thirimanne scored 25 runs off 34 balls before being caught by Najibullah off Nabi, Mendis was out for two and Angelo Mathews for a duck, both consumed by Nabi.

By the end of the 22nd over, Sri Lanka had already suffered a loss of 5 wickets. The fifth wicket was that of Dhanajaya de Silva who couldn’t score a single run and was caught by Shahzad off Hamid.

Thisara Parera’s run out in the 25th over was devastating. Bowled by Dawlat Zadran, Isuru scored just 10 off 21 balls. Kusal Parera, the highest Sri Lankan run scorer of the match with a score of 78 runs. Parera’s innings came to an end when he was caught by Shahzad off Rashid Khan. The Sri Lankans were restricted to 201 by Afghanistan.

Very few of Afghanistan’s batsmen scored runs in double digits. The openers, Mohammad Shahzad and Hazratullah Zazai  started the innings in great style and scored 34 runs in just 4 overs, thus giving the Sri Lankan bowlers some tension. This tension was released when Mohammad Shahzad was dismissed by Malinga at his personal score of 7. Afghanistan lost its second wicket, that of Rahmat Shah, by the end of the seventh over. At this point of time, the team’s score was 42 and Rahmat had contributed only 2 runs to the team’s score. The major shock that Afghanistan received was the dismissal of Hazratulah Zazai in the eighth over of the match. Zazai was caught by Perera off Pradeep’s ball. By the end of the thirteenth over, Afghanistan were struggling as they had lost 5 wickets with not many runs on board. Skipper Naib helped Afghanistan cross the 100 run mark by scoring 23 off 32 but soon he was also out, lbw to Pradeep. Najibullah Zadran tried to stem the rot and scored 43 off 56 and took Afghanistan close to the victory but he was run-out by Karunaratne while trying to steal a single. Zadran helped Afghanistan reach a score 145 runs but the dismissals of Dawlat Zadran and Hamid Hassan by Malinga helped Sri Lanka win the match. Afghanistan was all out by 32.4 overs and fell 34 runs short of victory.