2019 ICC Cricket World Cup: Hosts, Venues, Schedule, Fixtures, Time Table, The world cup is cricket’s biggest carnival as it features the best players from all nations and showcases the fight between the finest talents across the globe.
With just about a year left for the 2019 ICC cricket world cup, let us enjoy the facts and features of this stunning cricket tournament.

England and Wales will play hosts for the 2019 ICC cricket world cup after winning the desired rights in 2006. Initially, England and the Wales put a joint bid for 2015 world cup. However, a joint Asian bid got rights for 2011 ICC World Cup leading to the distribution of 2015 rights to Australia and 2019 world cup rights to England and Wales.

Only 10 teams will qualify for the 2019 world cup after ICC took a decision to
reduce the size of the tournament. In 2011 and 2015 World Cups, there were 14 teams but ICC has decided for a better and rigorous competition with a few nations.

The ICC world cup trophy is rewarded to the champion team but the original trophy always remains in the headquarters of ICC and winners get a replica of the original.

The Aussies have won the cricket world cup more than any other country amounting to 5 wins in their 9 finals appearances. India also do not lag behind and is at the second spot with a total of 2 wins out of their 3 world cup finals entries. West Indies ties with India with the total number of wins accounting to 2.

It is a matter of time to see which team becomes the champion for the 2019 world cup and surprisingly, England which is the creator of cricket have not won a single cricket world cup ever since ICC introduced ODI world cups.

India with a very aggressive mood and winning streak under the captaincy of Virat Kohli may win the 2019 world cup but the South Africans are
not far behind to challenge the winner’s spot. Australia may also win this tournament but it remains to be seen whether the home team
England would be able to bag their maiden champions title this world cup.

2019 ICC Cricket World Cup qualifiers, As England, is hosting the tournament, they are the first and automatic qualifiers for 2019 world cup. Top 7 teams in the ICC world rankings six months prior to the competition will be qualified for 2019 tournament. Two remaining spots will be decided based on a qualifier matches to be played in Zimbabwe in 2018.

West India and Afghanistan have qualified as the team number nine and ten for the 2019 world cup. Both teams finished at the top in the qualifiers to book their places

CONTROVERSIES OVER THE 10 TEAMS RULE

2019 ICC World Cup controversies, With the 10 teams rule introduced, affiliate nations of ICC protested against it with the primary reason being the development of their teams will not happen.

The main argument presented by affiliate nations ( like Ireland, Argentina, Austria) the World Cups provide great experience and learning opportunity which they do not get otherwise and these new rules would set the cricket in their country many years backward.

The ICC took aid in the interest of fans in quality matches and argued that matches with the affiliate nations will result in boredom which would
dent the spirit of cricket in fans leading to huge losses to smaller nations.

The other reason put forth by ICC is that every team would get
a chance to play with all the rival teams which was not given in previous tournaments thus leading to a more fairer tournament.

The format for 2019 cricket world cup would be slightly different from the previous tournaments because of the reduced number of teams being the core reason.

Also, ICC is looking to ensure there are no dead rubber games in the tournament as it reduces the interest and affects the tournament financially.
ICC has used a variety of patterns in previous world cups but now, as the number of teams is less, the pattern will be simpler in 2019 ICC world cup.

There would be only a single central group of all the teams where each team will play with the remaining teams. So there would be a total of 45 matches to be played in this group stage before the finals.

The quarter-finals stage has been removed because of the extended group stage and as such the 4 teams winning in the group stage would be directly playing in the semi-finals with the remaining 6 teams being knocked off.

The winner of each semi-final will advance to the finals.And the winner of the final match would be declared the world champion.

The fixtures for the 2019 world cup are not fixed yet but some of the venues for the tournament are already known. The so-called home of cricket, LORDS will host the finals of the world cup while THE OVAL will be occupied for the opening ceremony of the tournament.

The EnglishCricket Board has announced that the semi-finals will be played at Edgbaston and Old Trafford. The remaining games will be played across England and Wales in stadiums that meet ICC’s ground conditions and requirements.

Although the list of stadiums hasn’t been declared officially, it is sure that most stadiums will host more than one match each. 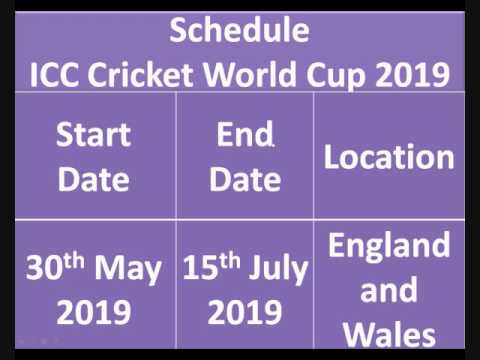