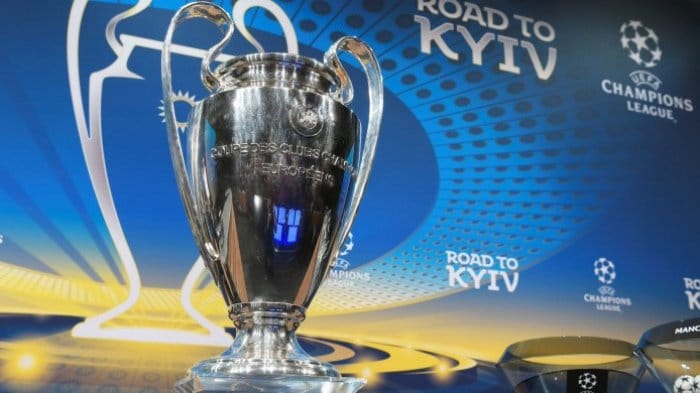 The whole World was fuming over the result of the draw of the Quarter Final of UEFA Champions League. Barcelona, Real Madrid, Bayern Munich, Juventus, Sevilla, Liverpool, Manchester City and Roma are the eight teams who have gone through to this stage of the competition. The draw was held in Nyon, Switzerland on Thursday.

The result of the draw have produced 4 mouth watering clashes for the football fans all over the World.

Barcelona will play against AS Roma.

Real Madrid will play against Juventus.

Manchester City will play against Liverpool.

Bayern Munich will play against Sevilla.

There are 3 sides from La Liga, 2 sides from English Premier League, 2 sides from Serie A and 1 side from Bundesliga in the quarter final of UEFA Champions League. We will see two battles between La Liga and Serie A sides. Juventus and AS Roma will be desperate to regain the old glorious days of Serie A. On the other hand, Barcelona and Real Madrid will try to continue the dominance of La Liga sides in the Champions League. Sevilla will try to upset Bayern Munich to continue their dream run. On the other hand, Manchester City and Liverpool will play against each other to represent one side in the semis from the English Premier League.

Analysis Of The Matches :

It will be a battle between Barcelona’s attack and AS Roma’s defense. Barcelona are clearly favorites in this tie to go through to the semis.

Though, Edin Dzeko’s presence at the upfront will always keep AS Roma in the hunt.

Real Madrid are favorites in this tie to go through to the next round. But they have to break the defensive wall of Juventus consisting of Chiellini, Barzagli, Benatia and Sandro. Ronaldo’s goal scoring form in this season’s Champions League is keeping Real Madrid ahead of Juventus to qualify from this clash.

Bayern Munich are favourites in this tie to go to the semis. Sevilla came in this round by defeating Manchester United at Old Trafford. They will try to continue their fine form in the European circuit. Ben Yedder’s goal scoring form will be a fear factor for Bayern Munich in this tie.