Barcelona clutch their first title of the season after a bumpy Champions League campaign. Leading Athletic Club to their second Copa del Rey loss in a month, Barca won 4-0 on the night. 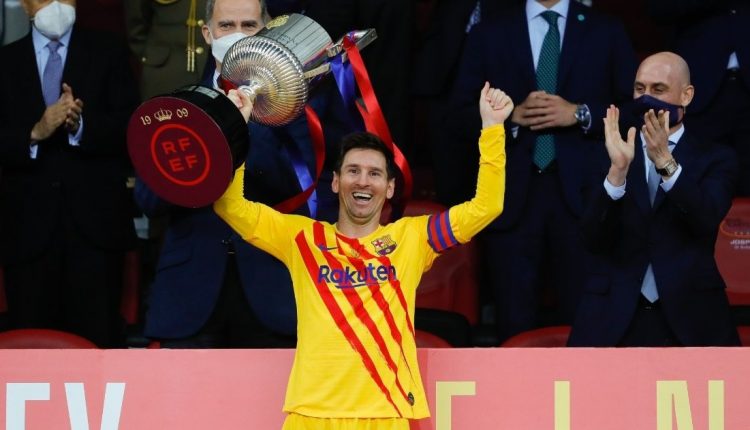 Barcelona beat Athletic Bilbao 4-0 on Saturday in Sevilla to win the Copa del Rey and secure their first trophy this season under Ronald Koeman. Frustrating for Athletic Bilbao as they were beaten for the second time this month in a Copa del Rey final, previously losing the long-delayed 2020 final to Real Sociedad.

The bombardment of all four goals began in the second half around the 60th minute as Frenkie De Jong set up Griezmann for the opener. Then after a cross by Jordi Alba, De Jong dived a header, doubling their lead. The Dutch set another one up for the team with Messi on the footwork shot into the bottom left corner to create the third.

Messi sealed the game in the 72nd minute, a powerful left-footer delivered by the captain slipping past the Athletic keeper. It would have been a five to nothing as after a through pass by Messi to Antoine Griezmann, the Frenchman swooped past Unai Simon and netted into the open goal. Unfortunately, VAR ruled out, but still, a margin this wide gave a good finale to all the Cules watching the match out there.

As per ESPN, The Dutch coach has been criticized for Barca’s failure to compete in big games, with that Supercopa defeat paired with Clasico losses and a Champions League exit. He will hope this win serves to silence the doubters and as a timely morale boost for the title run-in in La Liga.

Barca sits one point behind Real Madrid and two points back of Atletico Madrid with eight matches left in the Spanish Primera League.

Messi has been related to rumors of him leaving the club after this season for a long time now. Koeman, in the post-match conference expressing his thoughts, said:

“Messi is a winner. We have to talk about all our players because they deserve this title. But Messi makes the difference. All of us want Messi to stay here.”

Age is a number that does not matter to the player at all, as it has been proven multiple times by the Argentine; with 23 goals this season, Messi is the top scorer for the club and in all of La Liga this season.