Arsenal wins 4-0 on Europa League night. Gunners back in the race for the title

The Gunners gave one of their best performances of the tournament, turning a 1-1 first-leg outcome into an easy 5-1 victory on aggregate. 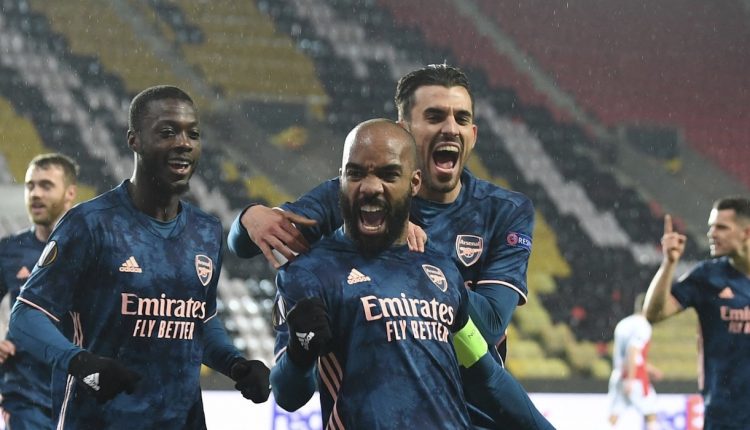 Arsenal players started the match by taking a knee, followed by their captain Alexandre Lacazette. This was to stand up against the incident risen on the Europa League match of Slavia Prague vs. Rangers where Slavia’s Ondrej Kudela racially abused Glen Kamara. This was a great initiative taken by the Arsenal captain to assess the situation, Arteta said.

Arsenal’s first goal by Smith Rowe in the first 15 minutes was ruled out by VAR, not a problem for them at all as they ended up scoring three more within the next ten minutes. Rowe on the ball again passed onto Nicolas Pepe, with two defenders on his tail, dribbled past Kolar, and shot into the net, acquiring an early lead.

Minutes later, Slavia defender Hromada clashed with Saka, giving away a penalty. Alexandre Lacazette took the shot with ease, tricking the keeper into diving towards the wrong side and slides the ball into the bottom right corner. In the 24th minute, the youngster Bukayo Saka got his revenge for his disallowed goal with a brilliant low-drive from his left foot into the bottom-right corner, tripling it for the Gunners.

“We started the game really well, really aggressive in our high press. We regained the ball every time they were attacking. We were really composed in our finishing in the final third and scored some great goals. The clean sheet is important as well, it’s the second one in two games, and we need to build on that … the boys were really at it from the start, and they showed real quality. It was a really important performance at a crucial moment … There are still a lot of things we can improve, but we have a real desire as a team to be better every day.” Mikel Arteta said post-match.

Lacazette doubled his goals at the 78th minute after depicting some beautiful footwork, going past both the Slavia centre-backs and his left foot. He shot it past Kolar, who was having a bad day at the office. With 4-0 on the scoreboard and 5-1 on aggregate, Arsenal sealed the match.

Arsenal advance into the semis along with their English competitor Manchester United and will face Villareal on 29th April and 6th May.

CISCE postponed the class 10th and 12th board exams, know what students said on this decision