Oil painting is one of the most common mediums in the art world. It has a classical elegance and enough range to provide viewers with an endless catalog to explore and find their new favorite pieces. One of the most popular muses in the medium is the execution of an oil painting portrait. These eight pieces are some of the most recognizable paintings out there, even if you don’t know the full story behind them.

Leonardo da Vinci painted this piece often simply referred to as Lady with an Ermine is a portrait of Cerilli Gallerani, the mistress of the Duke of Milan, who Da Vinci was also employed by at the time. Alongside the Mona Lisa, The Portrait of Ginevra de’ Benci, and La Belle Ferronniere, this painting was one of four portraits of women by the artist. Oil paint was a fairly new concept at the time and the painting was actually completed on wood rather than canvas.

The Mona Lisa by Leonardo da Vinci is probably one of the most famous portraits in the world. A large part of the reason that it’s stayed in the public eye is the enigma associated with it. What is the subject smiling at? Who is she? These are all questions that remain under debate to this day. One thing that is clear is that the artist took great care in creating this masterpiece which is one of the many reasons he’s gone down in history as one of the masters of his craft. 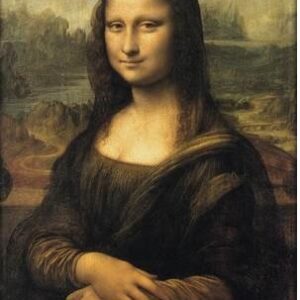 Mary Cassatt was a female Impressionist painter that specialized in capturing the intimate moments in a woman’s life on canvas. One of her particular muses was the relationship between mothers and their children. As such, it’s no surprise that her most famous piece, Breakfast In Bed, succeeded in doing just that. As the title of the painting suggests, the portrait shows a morning breakfast in bed as a mother holds her child in her lap. 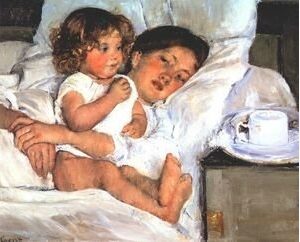 A Soul Brought to Heaven was painted by the Neoclassicist artist William-Adolphe Bouguereau. The painting reflects the Christian theology, as the indication of a biblical Heaven suggests. The painting has a slightly macabre theme as it addresses the concept of death in the Christian school of thought. However, it does carry a hopeful tone symbolized not only the angels themselves but the light in the distance as well. The soul they’re carrying also seems to be resting peacefully on their journey. 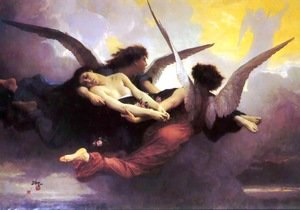 Elisabeth Louise Vigee Le Brun painted several portraits of Marie Antoinette over the course of her artistic career. Unfortunately, one of her earlier paintings of Antoinette in which the monarch wore a chemise dress was taken down from its original place in the Salon. She then painted this version, still featuring Antoinette’s signature flower, a pink cabbage rose, at the height of its bloom.

Van Gogh was a master of his art. Throughout his life, he cultivated a distinctive style that is easily recognizable even by casual art fans. His self-portraits stand up to the challenge of standing out of an already impressive repertoire. Because Van Gogh struggled with mental health issues throughout his life, his self-portraits are an especially interesting window into the view he held of himself.

7. Greece On the Ruins of Missolonghi, Eugene Delacroix

This piece was inspired by the tragic event of the Third Siege of Missolonghi. In this 1826 battle, Ottoman forces descended on Greece and captured the city of Missolonghi in a year-long siege. The siege ended when the captured individuals attempted an escape from the famine and sickness they were dealing with. The decision ended up being a fatal one and many Greeks died in the attempt. Delacroix brings a snapshot of this moment to life in this painting.

8. The Return of the Prodigal Son, Hamerszoon van Rijn Rembrandt

Rembrandt was no stranger to religious depictions in his paintings and he completed this one only a couple of years shy of his 1669 death. The painting calls on the Biblical parable of the prodigal son returning home to his father as its muse. Rembrandt captures the story perfectly and it’s easy to see the remorse in the son’s posturing at his father’s feet while the father pulls his son into his arms in a gesture of tenderness and forgiveness.

All of these paintings are strikingly beautiful and powerful. They showcase not only the talent of the individual artist but the versatility of the medium as well. They also only represent a small fraction of what this medium can do. If you’re interested, there’s plenty more to see and explore!