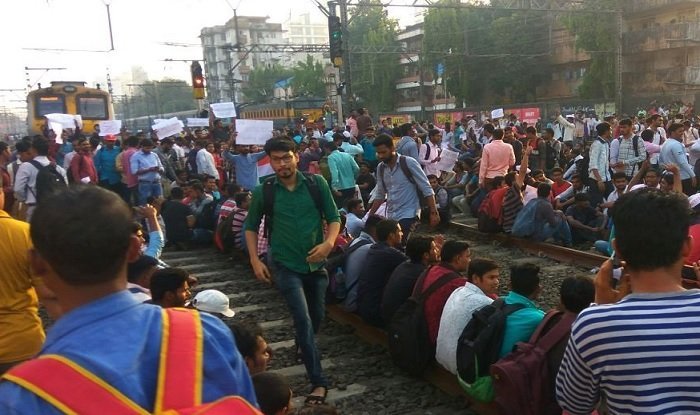 Around 30 local trains in Mumbai were cancelled as scores of students sat on railway tracks demanding railway jobs. Most of the protesting students include those who have already cleared their railway apprentice exams but have not yet been recruited. Indian Railways is one of the largest public sector employers in the country.

Local trains, which are the lifeline of Mumbai, were badly affected as protesters hurled around and started blocking trains from 7 am in the morning between the Matunga and CSMT (Chhatrapati Shivaji Maharaj Terminus) stations. A number of long-distance trains to and from Mumbai were also affected.

Railway officials have claimed that only a fifth of the total railway jobs is reserved for apprentices. The protesting students, however, want this quota limit to be removed. The students alleged that no such recruitments have been carried out by the railways in the last four years. “We are running from pillar to post. Over 10 students have committed suicide. We cannot let such things happen” told a student.

In order to remove the blockade, a large number of policemen even used batons on students who were refusing to leave the tracks. The protesters were seen holding placards and shouting slogans pressing their demand. Some of the students also demanded that until and unless Railway Minister Piyush Goyal comes and meet them, they are not going to budge.