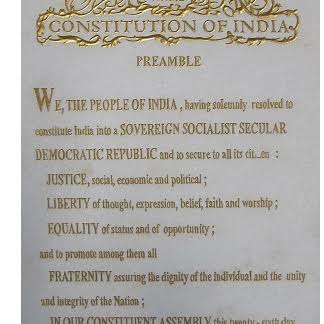 In the re Berubari Case, the Supreme Court stated that “Preamble is the key to open the mind of makers.”

There are three words which have been inserted in the Preamble by 42nd amendment Act, 1976 – Secular, Socialist and Integrity.

It means the state has the power to decide the matter itself and there is no superior or other authority having control over the state.

It means there is no monarch system and there is one head of the state which is elected by its people.

The literal meaning of Democracy is by the people, for the people, to the people. So, one can conclude that the Government in the State is elected by the will of the people at large.

The term equality doesn’t mean everyone shall be treated equally. It means like will be treated alike and unlike will be treated alike. That’s the reason why Article 15 of Constitution of India provides the power to the State to make special provisions for the protection of women, children, SC / ST, socially, economically weaker section was added by 103rd amendment Act and came into force on 14th January 2019.

The term secular means every person has the right to profess, practice and propagate religion.

Article 25 of Constitution of India talks about freedom of Religion which is a fundamental right guaranteed to every person but subject to morality, public order and health.

Is Preamble the part of the Constitution of India?

In re Berubari Case (1960), the Court held that Preamble is not a part of the Constitution of India.

But in Kesavananda Bharati v. State of Kerala (1973), the Court held that Preamble is the part of the Constitution.

Can Preamble be amended under article 368 of constitution of India?

Kesavananda Bharati v. State of Kerala (1973), the Supreme Court held that Preamble is the part of Constitution, it can be amended under article 368 but the basic structure of the Preamble can’t be amended or destroyed.