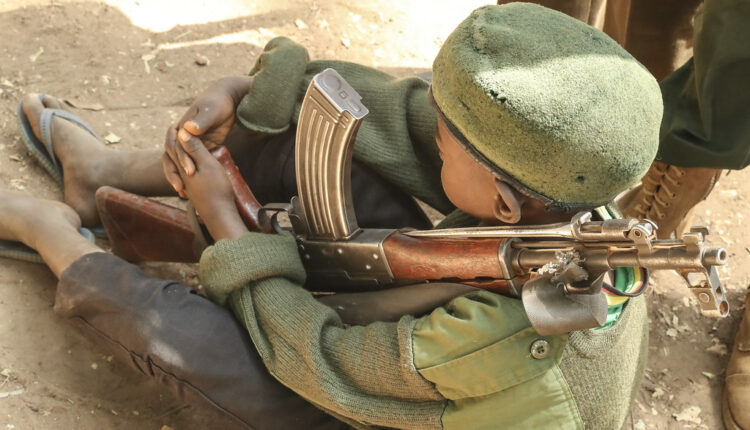 A child is the most innocent creature of the god. They are considered as the weaker section of the society because they are dependent on someone for their upbringing. Article 21 A of the constitution of India guarantees the right to education to children from 6 to 14 years of age. But are they getting their rights? In our locality, we often see children as ragpickers due to economic or social reasons. But have you seen children as soldiers due to their vulnerable nature. According to reliable data, thousands of children below the age of 18 years of age are fighting as a soldier in at least 14 countries all over the world.

According to the date of human rights watch(HRW) “thousands of children are serving as a soldier in armed conflict around the world.” Children soldiers include boys as well as girls. Boys are used as spy, messenger, they fight on front lines and often used in suicide missions. While girls are gifted to military commanders as wives or forced in sexual slavery. At the global level, the countries where children are engaged in the military are Afghanistan,Iraq, Burma, Somalia, Columbia, South Sudan, Sudan, Central African republic, Philippines, Thailand, Democratic Republic of Congo, Yemen. In India, recruitment of children is prohibited in the army in spite of the fact that India is one of the countries where children are used as soldiers because naxalite rebels in the Chhattisgarh region use children for military recruitment. In addition, it is observed that children may be recruited in other parts of the country such as in Andhra Pradesh, Jammu and Kashmir, North eastern states.

The initiative step towards banning the use of children in the military was taken by signing a treaty that i.e. optional protocol to the convention on the rights of the child on the involvement of children in armed conflict (OPAC). The treaty is also known as child soldier treaty and was signed on 25th may 2011 it came into effect on 12th Feb 2002. Now, this treaty is also celebrated as Red hand day. But why is this date celebrated as Red Hand day?  In 2009, youth and students all over the world came together to take strong steps to end the use of children in the military. They used the Red hand as a symbol against the use of children as soldiers . They gathered over 250000 red hands and presented them in New York to the UN Secretary general on Feb 12,2009. As a result of which they took pledge to work against such abuse and the date was celebrated as Red hand day.

Why are children easily recruited?

In many countries, use of child soldiers is prohibited in spite of that, children are used as Soldiers. So, what is the reason behind their vulnerability? Children are more vulnerable because of their physical and emotional immaturity. They are not able to understand the nature and consequence of their act. As a child, all they know is to fulfill their desire and needs. Another reason may be fascination towards the equipment. Due to the advancement in technology, weapons & small arms are easily available which can be easily used by children as adults. One of the main reasons is social and economic backwardness as many of them join for food security.