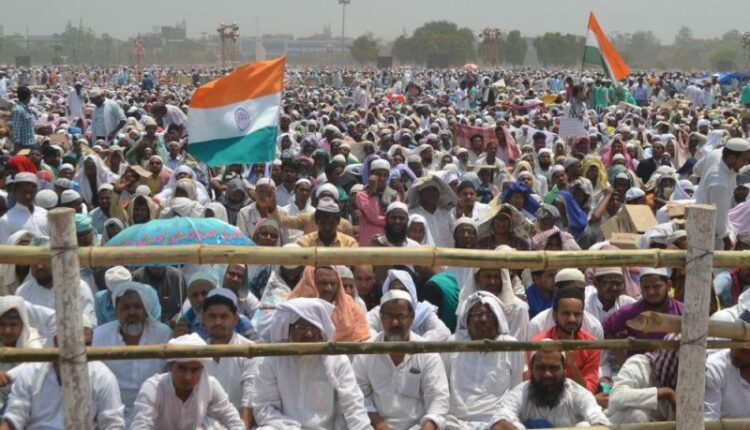 Maulana Wali Rahmani, general secretary of the All India Muslim Personal Law Board, addressed a massive gathering of Muslims at Gandhi Maidan in Patna, Bihar on Sunday, 15th April. The rally was co-organised by the AIMPLB and Imarat-e-Sharia.

The main motive behind arranging this conference was to express the disgust on the government’s inability to protect the Muslim personal laws in India and warn the community against the “evil design of RSS-controlled NDA government” at the centre.

‘Deen Bachao, Desh Bachao’ (save religion, save nation) conference witnessed a sea of Muslims attending the gathering. Rahmani also heads the Imarat-e-Sharia, which is an influential Muslim association from Jharkhand, Bihar, as well as Odisha. He also made it clear in that conference that, henceforth, no attack on their personal Muslim faith and law will be tolerated and that they intend to go on with their protest.

“We waited for four years, expecting that BJP would learn to run the nation as per the constitution. But we were wrong, take for instance Muslim personal laws which are under attack. We are compelled to inform our countrymen that Islam and our country is in danger under the present government at the centre.”

While addressing the crowd, Rahmani made a reference to the government’s interference with their Shariat by introducing the Muslim Women (Protection of Rights on Marriage) Bill 2017. He openly condemns the bill and demands revoking the bill.

Before the crowd he also voiced his concern, “Following triple talaq, it will be Uniform Civil Code and also ban on Azaan through loudspeakers. There is a long list”. It was made very clear at Gandhi Maidan on Sunday that BJP meddling with their faith and laws is really upsetting them.

Rahmani also gave a slight hint of the likelihood that the centre ruling party might have to experience disappointment in the upcoming 2019 election by saying “Let this be a warning for those trying to tamper with the Constitution, that people will not forgive them and their punishment will be reflected in the next general election”.