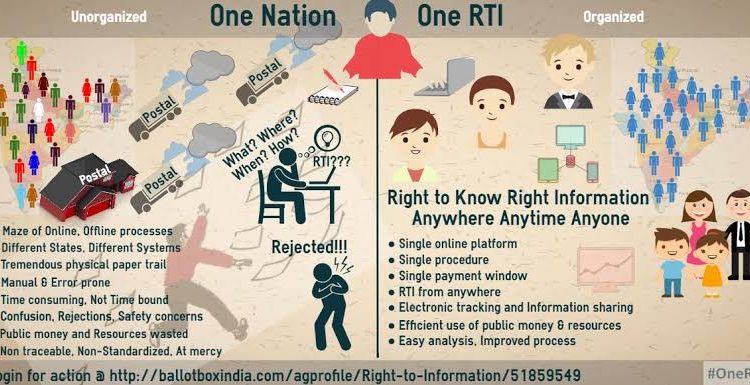 RTI (right to information) Act focuses on providing information to the citizens regarding the activities of the government. It gives power to the citizens and aims at maintaining transparency in the system. Filing RTI is not complex but the percentage of RTI rejection is high. In addition, no valid reason is given in 40% of the cases.Before we delve further, let’s see the procedure to file RTI. A citizen of India can file RTI in the online or offline mode. All they have to do is to visit the government site to file it. For offline filing they have to download the form and post it on the mention address of the respective department. This was just the theoretical part of how to file RTI and what RTI is and its objectives. But what is the ground reality? Is getting the response from the department as easy as filing RTI? Answer is ‘No’. Venkatesh Nayak, RTI activist analysed the report data and found that approx 40% of RTI is rejected without any valid reason and they don’t fall under the exemption clause mentioned under RTI Act, 2005.

If we see the fact it depicts how RTI rejection became common. According to the Annual Report of Central Information Commission, ‘In 2019-20 Centre has rejected 4.3% RTI requests’. 13.7 lakh RTI was filed in 2019-20 to public authority under Central Government out of which 58,634 were rejected due to various reasons. According to micro data analysis by the central information commission 2019-20, the home ministry has rejected the highest number of RTI which is figured as 20%. Along with this, financial minister rejected by 8% of received RTI while Delhi High court ranks third with 12% rejection rate, Ministry of Power have 11% rejection rate while Indian Air force – 11%, Supreme court of India – 10%, Ministry of shipping – 9%, Delhi Police 9%, IT Ministry – 8%, Ministry of women and child department rejected 8% of RTI received. Apart from this, it is observed that one out of every five RTI requests is rejected by the home ministry.

Rejection of RTI is not a violation of the rights of citizens as RTI Act has exemption clause under which Public Authority can reject RTI application. Grounds for rejection are personal information, information which may endanger life and safety information about cabinet papers, foreign government, copyright, matters relating to sovereignty and intelligence matters. So, it can be concluded that public authority reject 40% of received RTI without citing the exemption clause.

What are the rights of a child?

Is it fair to blame who committed suicide?

Does your surroundings affect your personality?

Why do people feel lonely while surrounded by people?

Do you know who is the one behind your failure?