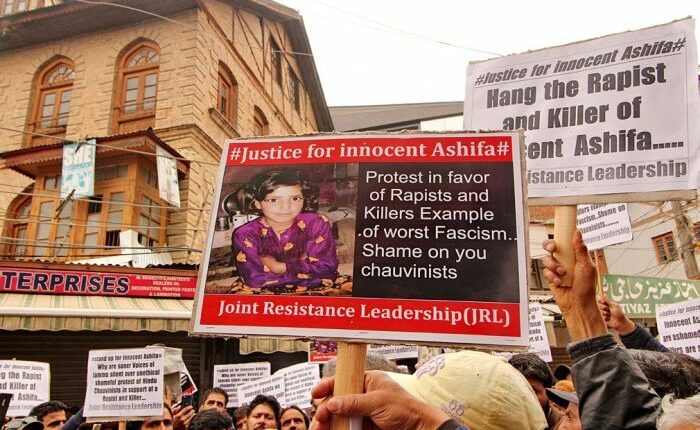 Celebrities and politicians expressed their outrage on social media when the charge-sheet revealed the brutality a minor faced, in her finals days before being brutally strangled to death. At the Kathua district of Jammu and Kashmir, a child was gang-raped repeatedly for 7 days, murdered and then dumped inside a forest nearby on 17th January this year.

Ashifa Bano, a minor from the Bakarwal community in J&K Kathua district, was kidnapped on the 10th of January and was held as a captive inside a local temple where she was drugged and raped multiple times by six men for a week before they killed her. The horror does not end there as one of the accused, just before killing her, asked the other perpetrators to wait for a while so that he could rape her one last time. They ensured her death by bashing her head with a rock.

The main conspirator of this horrific crime is a retired government official Sanji Ram, who plotted the whole thing and even provoked other culprits to do the crime. He is believed to have done this to force out the nomadic Muslim community of Bakarwals.

This incident created widespread outrage across the valley of Jammu and created a rift in BJP. The Union Minister VK Singh condemned the heinous act “We have failed Ashifa Bano as humans. But she will not be denied justice,” he tweeted. While on the other hand, his colleagues – J&K Minister for commerce and industries Chander Prakash Ganga and J&K Foreign minister Chaudhary Lal Singh rallied defending the accused and asking for a CBI probe.

Congress President Rahul Gandhi also tweeted on the same “How can anyone protect the culprits of such evil? What happened to Asifa Bano at #Kathua is a crime against humanity. It cannot go unpunished. What have we become if we allow politics to interfere with such unimaginable brutality perpetrated on an innocent child?”.