A new actor would be replaced in the film

The increase in covid cases made it tough and put many lives at risk. Shootings came to a halt. Celebrities are tested positive! Our National crush Kartik Aryan who filmed for Dostana 2 along with Jahnvi Kapoor and Laksh Lalwani is not anymore a part of the project! Kartik Aryan has been recently tested positive for Coovid-19 and got quickly recovered. Post his recovery, he also owned a Lamborghini and celebrated his success.
The actor also shot for Engage Adverstiment alongside Tara Sautaria recently. Earlier rumors floated about Kartik Aryan and Jahnvi Kapoor’s private relationship. However, rumors remained and nothing was made official. Due to some reasons, Kartik Aryan couldn’t shoot for Dostana 2 and kept postponing the schedule. As a result, Karan Johar got pissed off his unprofessional behavior and banned him from the film. The makers decided to replace him with a new actor. Jahnvi Kapoor also stated that she lost a film as she prioritized Dostana 2 over that film when the dates got clashed. 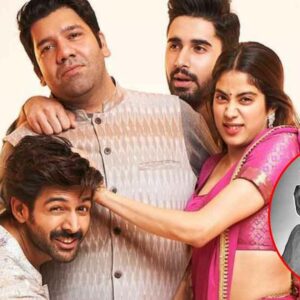 On hearing the flash news, Kartik Aryan’s fans got totally upset and compared this issue to SSR’s nepotism case. Fans feel like Bollywood always put star kids as their priority and doesn’t encourage new stars into the industry. Not only Dostana 2, but the actor also lost a film under Sharan Sharma’s direction. Karan Johar and his entire team are currently not on good terms with the actor and decided not to work with him ever in the future.

Do you think it is fair to do so?? Not one, but two and also completely being banned from that banner! So upsetting! He lost wonderful opportunities in a row that would emerge him as one of the lead actors. However, he gained a huge fan following all over the world with his charm and beautiful performances. I hope he would be offered great opportunities and lead a bright future very soon.

However, the actor would be seen in two of his upcoming films- Bhool Bhulaiya 2 with Kiara Advani as the female lead and the remake of Allu Arjun’s film, Ala Vaikuntapuramuloo directed by Rohit Dhawan and produced by Ekta Kapoor. Who you think will be roped in for Dostana 2 alongside Jahnvi and Laksh?? Let me know in the comments section below!