Kangana Ranaut as and in Thalaivi Movie First Look 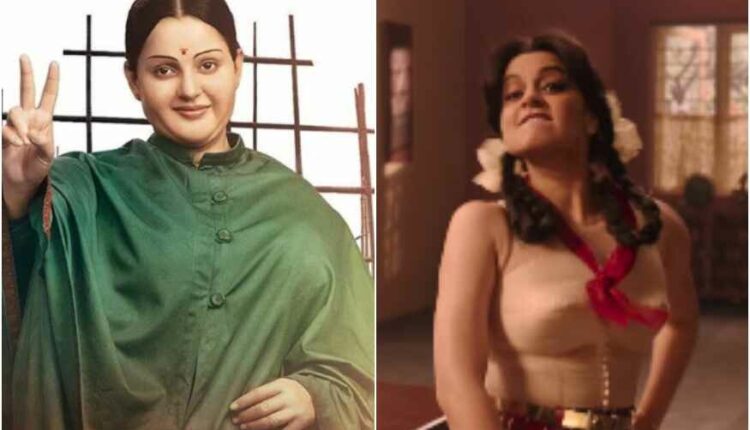 Kangana Ranaut upcoming film Thalaivi is something people were looking forward to but it looks like the first look of this film is not getting appreciated by netizens. It seems that the poster has failed to make an impact and getting trolled mercilessly. If you don’t know, Thalaivi is a biopic of the late politician, Jayalalithaa – the former Chief Minister of Tamil Nadu. She passed away on December 5, 2016, because of a cardiac arrest. She was called ‘Puratchi Thalaivi’ which means a ‘revolutionary leader’.

The poster was released on Kangana’s Instagram handle and people can’t stop trolling Kangana and the filmmakers for showing poor prosthetics used on her face! Many people suggested keeping Kangana’s face as it is because all that is important is showing the life story, instead of making her look like Jayalalithaa.

The first poster was captioned as, “The legend we know, but the story that is yet to be told! Presenting #KanganaRanaut, in & as #Thalaivi. A film by #Vijay, arriving in cinemas on 26th June 2020.”

If you look at the poster, you can see Kangana in dark green cape with a border and a bottom, with a big bindi on her forehead.

A short teaser of the film was also released on YouTube. You can watch the teaser here.

Actor Arvind Swamy, best known for his roles in Mani Ratnam’s “Roja” and “Bombay”, will portray the role of late Tamil superstar and former Chief Minister MG Ramachandran in this film.

In the beginning, Kangana admitted that she was finding it difficult to learn the Tamil language for the film. She had to learn the language as per demand of the film’s script. Other than Tail lessons, Kangana got herself into Bharatnatyam classes for her role. She also spent a lot of her time on prosthetic makeup sessions.

The film “Thalaivi” is a multilingual and will release in Tamil, Hindi, and Telugu. A. L. Vijay is directing the film and the film is now scheduled to release on June 26, 2020.

On the work front, Kangana was seen in Manikarnika: The Queen Of Jhansi and Judgemental Hai Kya this year. Next year she will be seen in Ashwiny Iyer Tiwari’s kabaddi film Panga and the action film titled Dhaakad.